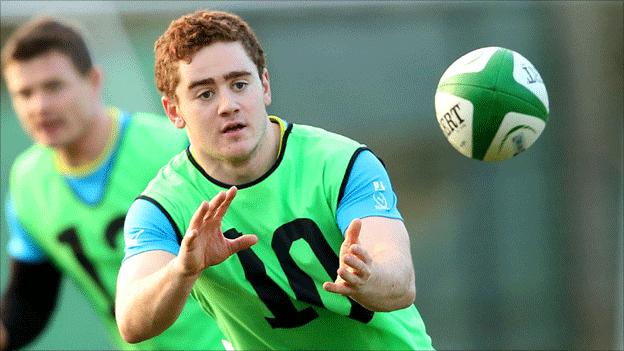 Ulster fly-half Paddy Jackson has edged out Ronan O'Gara for a starting role in Ireland's Six Nations game against Scotland at Murrayfield on Sunday.

Jackson wins his first full cap after featuring for an Ireland XV in the win over Fiji at Thomond Park in November.

First-choice Jonathan Sexton is out injured, while O'Gara has been off form for Ireland and Munster recently.

Ulster centre Luke Marshall will also make his first Ireland appearance as one of five changes to the starting XV.

Marshall, 21, impressed in the non-cap match with Fiji and has performed well with his province this season.

He is preferred to Fergus McFadden as a replacement for regular inside centre Gordon D'Arcy, who has been ruled out of the remainder of the Six Nations with a foot injury.

Simon Zebo is also out for the rest of the campaign, so Keith Earls takes his place on the wing.

The inclusion of 21-year-old Jackson at the expense of Ireland's highest ever points scorer O'Gara represents one of the biggest calls of Kidney's tenure as coach.

A clearly emotional Irish coach admitted at the team announcement that it was "very difficult to leave Ronan out".

Another Ulsterman, Tom Court, starts at loose-head prop ahead of Dave Kilcoyne, despite not being included in the matchday 22 for the opening two fixtures against Wales and England.

Court was drafted into the squad after Cian Healy was banned for the games against Scotland and France, following a stamping offence in the defeat by the English.

The selection of Court, Jackson and Marshall sees the Ulster representation in the starting line-up rise to five, compared to two in the opening two Six Nations matches.

As expected, Donncha O'Callaghan comes into the second row to replace Mike McCarthy, who misses the trip to Edinburgh after sustaining knee ligament damage.

O'Callaghan's Munster team-mate Donnacha Ryan has been passed fit to play after overcoming a back spasm.

Leinster back Luke Fitzgerald, a long-term absentee from Ireland duty because of injury, is named among the replacements, along with second row Devin Toner.

Iain Henderson's versatility as a lock or back row forward sees him take a place on the bench.