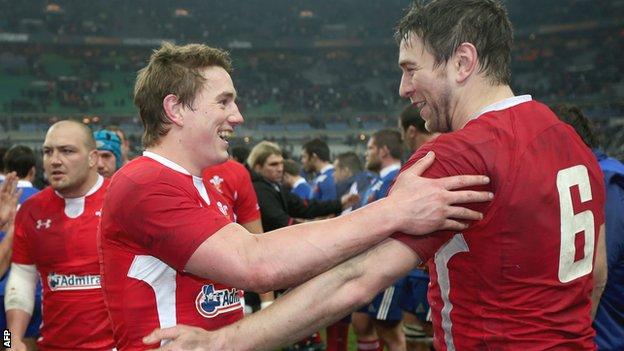 If a week is a long time in politics, three are an eternity in the Six Nations, as both Italy and Wales can testify. The Azzurri began their campaign with a memorable victory against France but were brought resoundingly back to earth by Scotland six days later, and this week learned that captain and inspiration Sergio Parisse will be banned for the rest of the tournament.

Conversely, Wales recovered from an opening defeat to Ireland (their eighth successive Test loss) by grinding out a gutsy win in Paris. Confidence, such a fragile but crucial commodity, seems to be returning to the Welsh camp - as demonstrated by Rob Howley's bold decision to name his starting line-up a week early.

Italian skipper Parisse is fluent in at least four languages but it was his proficiency in English which earned him a red card in Stade Francais' win against Bordeaux-Begles last Saturday.

He denies directing an Anglo-Saxon insult at referee Laurent Cardona during that match, but a French league disciplinary hearing upheld his dismissal, banning him for 40 days, the last 10 of which are suspended.

It is difficult to overstate his importance to Italy, both as a leader and world-class number eight. In the last 10 years the Azzurri have won only one Six Nations match without Parisse (Scotland in 2010). It's hard to think of another Test player who stands so clearly head and shoulders above his team-mates.

While Italy have made four changes to their team, dropping half-backs Luciano Orquera and Tobias Botes, Wales are unchanged.

Howley's decision to reveal his team 11 days before the game was unusual, but has been met with almost universal praise. Leaving out fit-again captain Sam Warburton must have been difficult, but by making his mind up early Howley ensured speculation and debate didn't overshadow Welsh preparations.

"Italy showed against France that they are a quality outfit and you can't under-estimate them anymore. Psychologically, it is a big test for Wales to back up what they did in Paris."

Warburton himself says it was "a smart call", enabling the squad to take full advantage of their two-week break. Of course, no amount of preparation can guarantee success, so Warburton's presence on the bench (along with Alun Wyn Jones) gives Howley plenty of options if things don't go to plan.

Should Wales win, they will make history by winning four successive Six Nations away games for the first time. The last time they managed that feat in the Five Nations was between 1977 and 1979. But Italy also have a landmark in sight - the Azzurri are chasing an unprecedented third successive home win in the tournament.