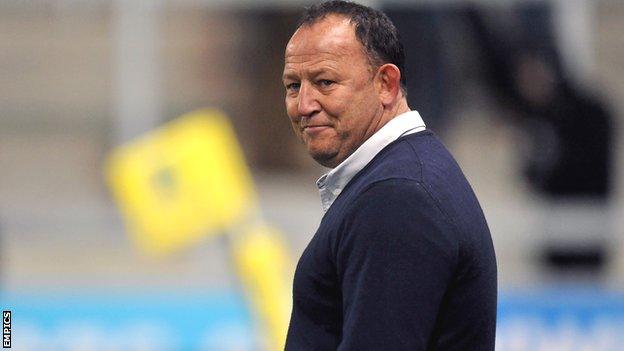 Steve Diamond has confirmed that he will remain as director of rugby at Sale for "the next couple of years".

And Diamond has transformed results at the club, with the Premiership's bottom side

He told BBC Radio Manchester: "For the next couple of years, the coaching team will be staying as it is."

Bryan Redpath and Pete Anglesea have been assisting Diamond in recent weeks, while co-owner Ian Blackhurst is set to fill in as chief executive.

Diamond assumed the role of director of rugby in the final weeks of last season and guided Sale to a final position of sixth in the Premiership, guaranteeing qualification for the Heineken Cup.

He has been in charge for three of Sale's four Premiership wins in 2012-13, having following

Diamond has also revealed that new contracts have been offered to 10 Sharks players ahead of next season, and he is confident that some of those deals will be tied up by the time Harlequins visit the Salford City Stadium on Friday.

lifted Sale to within one point of safety, although Diamond is much more realistic about his side's chance of beating the league leaders in their next outing.

He added: "We're still bottom of the league, but to beat the side that's only a couple of places above us was really important.

"But this week we come across the top of the league, which is a completely different proposition.

"We've got to be at the top of our game and they've got to have a shocker, driving up in the fog and the ice, for us to stand a chance of winning."