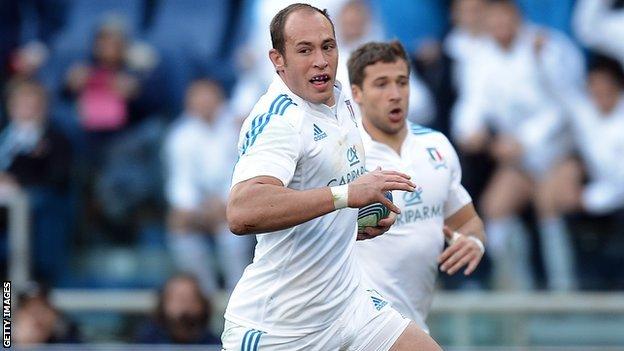 Ex-Wales skipper Michael Owen says Sergio Parisse's 30-day suspension for verbally abusing a referee is good for Wales, but a blow for the Six Nations.

Italian captain Parisse was banned by a French league disciplinary hearing after being sent off for Stade Francais against Bordeaux-Begles.

Parisse misses the rest of the Six Nations, starting with Saturday's match against Wales in Rome.

"I think it's good for Wales, but it's a shame for the tournament," said Owen.

"You want to see the best players out on the field.

"It's a massive blow for Italy. He's been in good form, especially in the [23-18] victory against France, so he'll be sorely missed."

The view from Italy

"I think the Italian team will be pretty shell-shocked. As a leader and a No 8 Sergio is world class.

"But in saying that there are some good loose forwards coming through the ranks, so even though he's a huge member of the team there are good players who can take his place as number eight.

"But I think it will affect their confidence because he's a game-breaking player and the players who can replace him are just hard workers."

Parisse was banned for 40 days by the LNR (French league) hearing on Wednesday, with 10 days suspended.

Former number eight star Owen captained Wales when they won the Grand Slam decider against Ireland in Cardiff in 2005 and also toured New Zealand with the British and Irish Lions that year.

He said Parisse, 29, was a good player back then, but is an even better one today.

"I played against him between 2002 and 2007 and he's probably developed even more since then," added Owen.

"You could see he was a talented player. He always had great footwork and he was always one of the Italian players who looked to get on the ball a lot.

"Since then, with maturity, I think he's really developed and he's become a talisman for the Italian team.

"I think it [Parisse's absence] will make a difference, but Italy will have someone who's a very capable player coming in.

"Going to Italy is going to still be a tough task for Wales and they'll have to do perform well."

And Owen backed the decision to impose a severe penalty on Parisse.

"He's been found guilty of abusing a referee and if that's the punishment for that then I think it's fair enough.

"I think it's good to send a strong message."