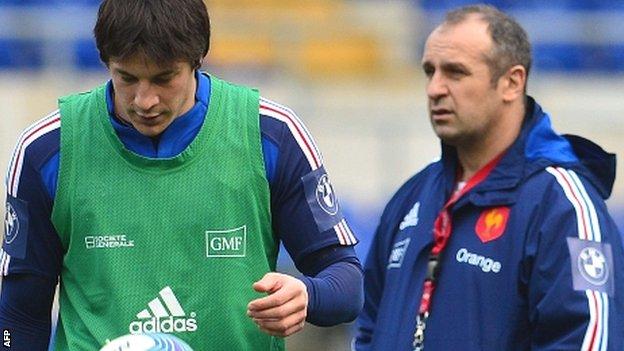 Francois Trinh-Duc returns at fly-half as France make seven personnel changes, plus one positional, to their side to face England in the Six Nations.

Trinh-Duc replaces Frederic Michalak with Morgan Parra back at scrum-half.

Let's be French: courageous, audacious, unpredictable. We need to play without the handbrake and be bold

It constitutes the radical surgery from coach Philippe Saint-Andre that many predicted after France lost both their opening Six Nations matches - away to Italy, home to Wales - for the first time since 1982.

The half-backs who started those defeats - Michalak and Maxime Machenaud - have been relegated to the bench as Trinh-Duc starts his first Test since a 23-20 defeat in Argentina last June.

Clerc, who has scored 34 tries in his 64 Tests, gives France an experienced finisher to call upon after he missed the opening two matches through injury.

The 31-year-old's return see Fofana revert to what most observers believe to be his best position at inside centre, from where he scored four tries in an impressive debut Six Nations campaign last year.

He will partner the giant Mathieu Bastaraud, with Maxime Mermoz dropping out of the 23 altogether.

Up front, the squat figure of Domingo, a technically superb scrummager, comes in at loose-head in place of Yannick Forestier, with Kayser starting at hooker and Dimitri Szarzewski relegated to the bench.

Toulon lock Christophe Samson, who has only one cap, takes over from Jocelino Suta with Pascal Pape still sidelined.

The other change sees Nyanga, unlucky to miss out in the opening two matches after a strong autumn campaign, replace injured flanker Fulgence Ouedraogo.

"We wanted to bring freshness," said Saint-Andre. "When you have lost your first two games you must make changes. I did a lot of rotations but changed the players within a squad we've had for a year."

The under-fire coach has been criticised for his pragmatic approach, but now insists he wants his side to revert to more traditional French virtues.

"It's always good when we're scared. We'll have to stick together and get ready for a great fight.

"We need to play our best game, try to be very well organised, be disciplined. It's not just by kicking and chasing that you can beat England.

"We need to play without the handbrake and be bold. For French rugby, it's better to be outsiders than favourites."