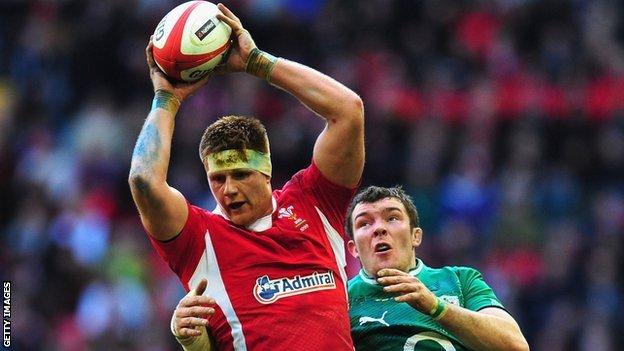 Wales lock Andrew Coombs admits he will be under pressure against Italy in the Six Nations on Saturday.

He retained his place in the team despite the return from injury of Alun Wyn Jones, who is on the bench.

And Coombs, 28, said: "There is a lot of pressure on me this week, and thankfully they have put the trust in me to go back out there and hopefully put another performance in."

Having moved from back row to the second row for the Dragons this season, Coombs was the surprise call-up amid the Wales lock injury crisis that preceded the tournament.

I always base my game on work-rate. I am not the sort of player that is going to set the world on fire or make 60-yard breaks

Charteris and Davies will play no part in the tournament, while Osprey Ian Evans overcame a knee injury to join Coombs in facing Ireland in Wales' opening 30-22 defeat by Ireland.

They pair up for the third Test in succession against Italy on Saturday.

However, the return of 67-capped Jones following a shoulder injury suffered in defeat by Argentina in November has increased the competition for Coombs.

Wales coach Rob Howley has stuck with Coombs in an and the Dragon said: "I just want to keep my game going, play as I have done in the first two games and retain my jersey.

"My form is good at the moment, and if I can keep the jersey for this campaign then there is a tour of Japan in the summer.

"I am just looking to win as many caps as I can. I've just got to go there and work hard. If do that then hopefully things will happen for me.

"I always base my game on work-rate. I am not the sort of player that is going to set the world on fire or make 60-yard breaks.

"I am there to work hard, hit rucks, carry ball and tackle. That's what I am trying to do.

"Alun Wyn is a fantastic player, and I have always enjoyed watching him.

"His work-rate is phenomenal. He is a class act, he has won 67 caps, been a British Lion and has been there and done it."