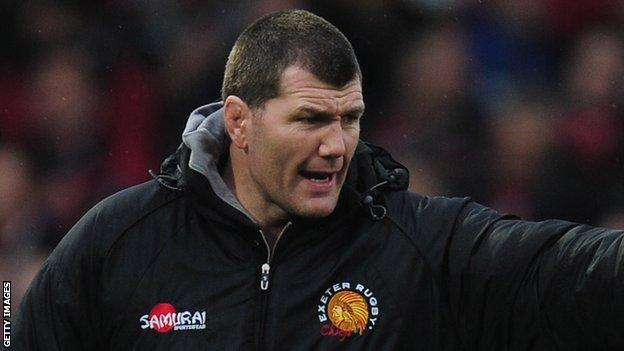 Exeter Chiefs head coach Rob Baxter says he will not change his approach to games despite a run of five Premiership matches without a win.

Baxter's side have lost to Saracens and struggling Sale in recent weeks.

"If you start taking games in isolation and start overreacting to them, you get into a spiral of reacting differently every week," he told BBC Radio Devon.

"The teams that come through times when they're not winning stick at it and realise what works for them."

The season shouldn't hang on one game, and we're still having a solid season

He added: "We've been a side that's always been looking to develop our game over a period, and we need to keep pushing forward with that."

Exeter's poor run of form has seen them stagnate in the Premiership's mid-table, and they currently lie eighth in the league.

On Saturday they face a London Welsh side two places below them, who are looking to avoid relegation in their first ever season in the Premiership.

However, Baxter believes that both side's campaigns will not be defined by the game at Sandy Park.

"The season shouldn't hang on one game, and we're still having a solid season," Baxter said.

"The Saracens game got away from us, but other than that all our games have been pretty tight affairs.

"You need to keep looking at the bigger picture."