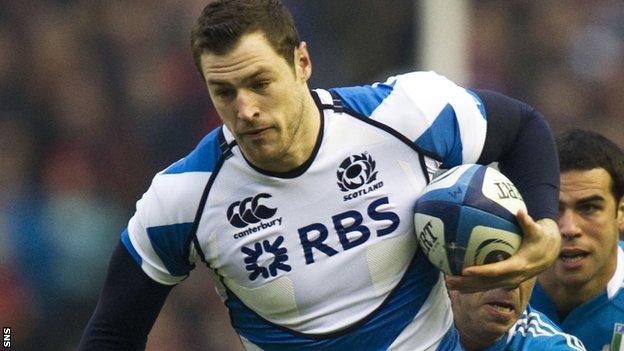 Scotland must be more aggressive before they can claim to be Six Nations challengers, insists winger Tim Visser.

The Edinburgh back has been a key component of second-place Scotland's attack, which currently leads in terms of championship tries.

"It's good to see that right across the back three but it is perhaps disguising where we are as a team," said Visser.

The Scots notched up two touchdowns in their opening-day defeat to England before running in another four in their 34-10 success over Italy two weeks ago.

But both games gave cause for concern at the breakdown as Scotland struggled to develop quick ball to their pacy runners.

"Those are all important areas we need to improve on," said Visser.

The Netherlands-born player, who, along with fellow wing Sean Maitland and full-back Stuart Hogg, has contributed four tries as part of Scotland's campaign, said: "It's a vast improvement from where we have been in the past in terms of finishing.

"We are making up for that by scoring tries, which is never a bad thing, but to become a better side we need to look at those fundamentals.

"But the Italy performance was a good first step. We scored a lot of tries and the scoreboard looked brilliant.

"However, against some of the other teams in the Six Nations, we will get it a lot tougher and if we don't get these fundamentals right. We won't be able to score those tries."

Ireland visit Murrayfield this Sunday looking to extend a run of victories that stretches back to their only Edinburgh defeat of the Six Nations-era in 2001, but Visser is unconcerned with the history books.

"The past is the past," he said. "We can't do anything about that. A lot of the players in this squad were not in those sides. Whatever happened in the past has nothing to do with what we can do in the future."

The Ireland side that runs out in the Scottish capital will, however, bear little resemblance to the team which pushed England close in a 12-6 defeat in Dublin.

Declan Kidney, the Ireland coach, has made five changes to his starting line-up as a result of injury and suspension but Visser insists the quality of Scotland's opposition will remain high.

"Whatever Ireland side is going to be out there, it will be full of passion," said Visser.

"Traditionally, they like Murrayfield; they like coming over here. They are a good team, no matter who plays, so we are not looking at it like a weakened side is facing us.

"Ireland will be very physical. The first 20 minutes will be hell on earth.

"They are going to unleash everything they have against us. If we can ride out that first 20 minutes then we are in with a chance. It's very important we get off to a good start."