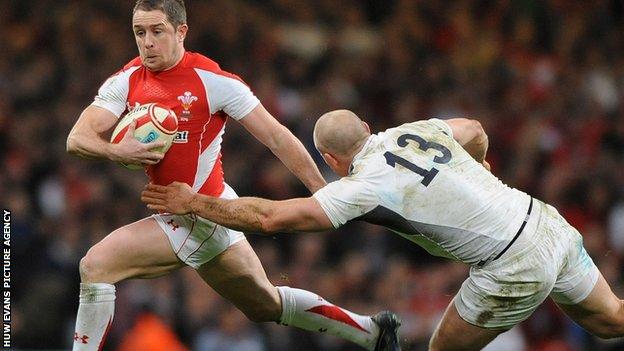 Ex-Wales wing Shane Williams has tipped England to win the Six Nations, but says Wales will push them all the way.

Williams believes the title will come down to the final game between England and Wales at the Millennium Stadium on 16 March.

He predicted the two countries would remain unbeaten from now until the Cardiff showdown.

"I never want to bet against my country, but I don't see anyone beating England again," said Williams.

"I don't see Wales losing again up until the England game on the last day.

"England are the form side, [and are] consistently going to get better as the tournament progresses."

So far championship leaders England have beaten Scotland (38-18) and Ireland (12-6), while Wales went down to Ireland at home before beating France 16-6 in Paris.

Williams, who won 87 Wales caps before retiring from international rugby in 2011, told BBC Radio 5live he believed Rob Howley's team would win in Italy on Saturday and Scotland on 2 March, but will have to improve.

Despite Wales beating France to end an eight-match losing streak Williams was critical of the performance.

"It wasn't the ideal performance. With ball in hand they were still a bit ropey as far as I was concerned," he said.

"They were still a little bit flat at times. They tried being direct with Jamie Roberts [and] getting the ball to George North a lot but it wasn't very clean.

"I think what won it for Wales on the day was their defence. Their defence was immense and I think Shaun Edwards will be very happy with that.

"Even when the defensive line was broken our scramble defence was very good and Wales were able to clean up. I thought Leigh Halfpenny had a great game again.

"Wales certainly know that they are going have to play a lot better with the ball and defend as they did against France."

"Sam Warburton is a massive talking point, and being Welsh I don't know how I'm going to be taken on this, but I believe Tipuric is the right choice," said Williams.

"I think he has been playing extremely well for the Ospreys. He's deserved his call. He had a great game last week and has been rewarded with that by Rob Howley with a start this week.

"What a fantastic player to have to come off the bench in Sam Warburton, who leads from the front. We are very lucky we have talent in the seven position at the moment. Which one do you pick?"