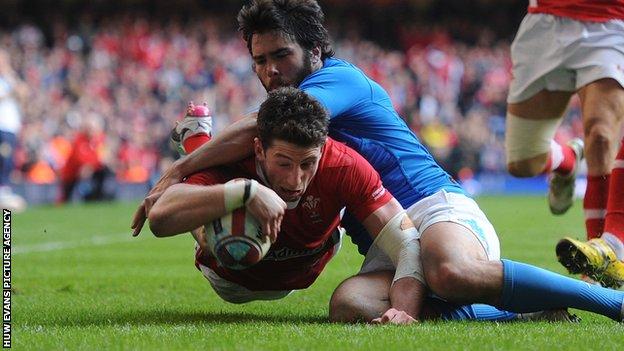 Wing Alex Cuthbert believes Wales must be prepared to face the Italy team that stunned France rather than the outfit well beaten by Scotland.

The Azzurri opened their Six Nations campaign with a 23-18 win over France but then lost 34-10 to Scotland.

Their hopes of beating Wales have been hit by the loss of influential captain Sergio Parisse to suspension.

"They will be the same as they were against France at home," said Cuthbert, who scored against Italy last season.

"And it will be a tough challenge. We will have to front-up.

"They [Italy] showed what they can do at top level against France."

But despite being wary of Italy, Wales are in a much better place than when the Six Nations campaign started, having ended a demoralising run of eight successive defeats with their 16-6 victory over France.

It is still possible for Wales to retain their title with successive victories over Italy, Scotland and England.

Cuthbert, set to win his 16th cap, believes it was the right call by interim head coach Rob Howley to name an unchanged Wales team just 72 hours after the victory in Paris.

"Morale is really high," said the 22-year-old Cardiff Blues player. "The boys thought it [early selection] was a good call. The side has been together pretty much for the past two weeks. We've done a lot of sessions together as a team.

"We tried to play a bit of rugby against France, and with the confidence of getting that win and putting all those losses behind us hopefully we can play the way we did in the Six Nations last year."

And Cuthbert admitted that Wales have far from given up hope of lifting the Championship for a second year.

"The championship is definitely possible, but we are taking one game at a time," Cuthbert added.

"Momentum-wise we need a win against Italy on the back of the win in France.

"Hopefully we are going to keep the winning run going now. The boys are really excited about this game."

Italy coach Jacques Brunel has insisted he side are not a one-man team despite losing the influential Parisse to suspension.

The Stade Francais number eight was sent off playing for his club against Bordeaux-Begles last weekend, and subsequently received a 40-day ban, 10 days of which were suspended.

Parisse is set to appeal that punishment, which was imposed for insulting referee Laurent Cardona.

"We have to look at this game against Wales with ambition," Brunel said.

"I think we can win it despite the absence of Parisse. There are lots of players who are very influential in the game. Sergio is undoubtedly one of them, but he isn't the only one.

"We can't think this team is dependent on one player."