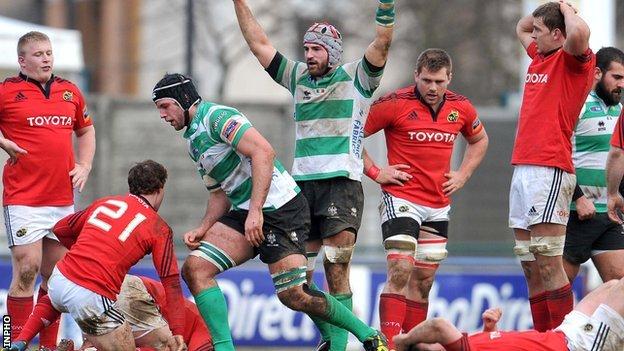 Munster's hopes of reaching the Pro12 play-offs suffered a serious setback when they were resoundingly beaten by Treviso at the Stadio di Monigo.

The province lie sixth in the table, half-a-dozen points behind the fourth-placed Ospreys.

It was a deserved win for the Italians with tries from Ludovic Nitoglia, Filippo Giusti, Gideon la Grange, Fabio Semenzato and Giulio Toniolatti.

A penalty try had briefly given Munster hope with 30 minutes left.

Munster, beaten 18-10 by the Scarlets last time out, were behind after just three minutes when winger Ludovic Nitoglia raced in under the sticks, giving Alberto Di Bernardo a simple conversion.

Keatley frittered away a chance to reduce the gap when he dragged a penalty wide before Di Bernardo followed suit, although Filippo Giusti was soon touching down to make that irrelevant.

The try had been on the cards and only a fine Johne Murphy tackle stopped Toniolatti making it three early touchdowns, before Keatley found his range with a three-pointer.

Gideon la Grange poured water on any revival hopes, though, scoring a try that was converted by Di Bernardo and, when the fly-half added a penalty, it gave Treviso a 22-3 half-time lead.

The sin-binning of home hooker Giovanni Maistri at least gave Munster a second-half breather, with a penalty try and Keatley conversion giving them a sniff with half an hour to go.

There was no grandstand finish for the Rob Penney's side, though, as Treviso got their bonus point as Semenzato dotted down on the hour and Toniolatti did the same with two minutes left, Di Bernardo converting one of them.