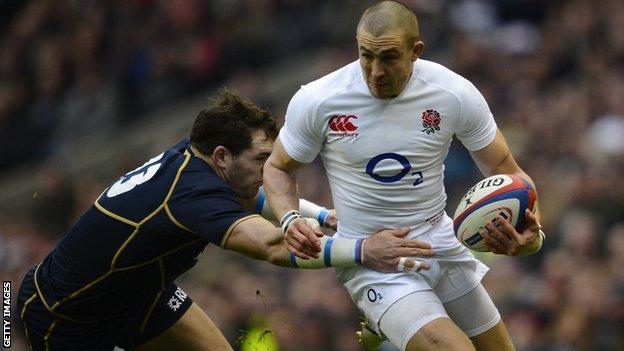 Winger Mike Brown insists England will look to take on France at their own attacking game in their Six Nations clash at Twickenham on Saturday.

Both coaches have picked heavyweight line-ups, with much of the pre-match focus on the scrum and line-out.

"Every game I go into I think I can attack," Brown told BBC Sport.

"Unless it's blowing a gale and you can't see for snow in your eyes, you can attack. I want to run with the ball."

Brown continued: "France have got a kicking game in (half-back pairing) Francois Trinh-Duc and Morgan Parra - they can kick it a mile, just like Jonny Sexton and Ronan O'Gara did when we played Ireland.

"They'll be working the back three with their kicking game, but they can also run it from anywhere, so we'll have to be at our best. They can be so unpredictable to defend against."

Brown has made the England left-wing berth his own in recent matches, happy to convert from his favoured position at full-back to keep his place in a fast-developing team.

"It's great fun at the moment, because we're winning," he said. "We enjoy each other's company.

"There are a few guys who didn't get the opportunity under the old regime who have now, and they're keen to show why they should have been in in the first place, like Brad Barritt.

"We knew after the New Zealand win in the autumn that there was still a lot to work on. We have the belief that we can be a great team, and although there's a lot of work to put in before then, the winning helps that belief."

France have a poor recent record at Twickenham, with only one win to show in their last six visits. With defeat at home to Wales a fortnight ago following their shock loss to Italy on the opening weekend of the championship, it means that Phillipe Saint-Andre's men have now lost four Six Nations matches on the bounce.

Inside the minds of the England coaches

"How have Stuart Lancaster and his lieutenants Andy Farrell, Graham Rowntree and Mike Catt achieved such a startling transformation?

"With admirable candour and insight, the four men - for the first time - take us inside that closely-guarded world."

Brown, 27, is cautious of those who make England favourites to come out on top in this contest but he believes the strength in depth on the home team's bench could prove a pivotal factor as both sides tire in the last 20 minutes.

"As a spectator you would pick this French team rather than the ones from their first two matches," he said. "But they've got dangerous players throughout the squad. Look at how well they played in the autumn, or how they turned it around in the World Cup.

"We've got such a good squad now, so if we need to change things up in the last 20 minutes we can do. In Ireland we didn't even use Danny Care and Toby Flood, who are our most-capped backs.

"Our fitness is great - to say the French are not physically up for it is wrong - but that last 20 minutes will be key, because it will be a tight game with only a few points in it."

Brown will be inspired on Saturday by his memories of clashes past between the two great rivals, including one particularly bloody and infamous encounter.

He said: "My dad was a rugby fan, and he used to take me along to Twickenham. I never saw us play France, but we always watched it on the BBC.

"The one that sticks out is the World Cup quarter-final in Paris in 1991, when Brian Moore gave it the face, Mickey Skinner put in that tackle, Serge Blanco filling in Nigel Heslop, Jeremy Guscott scoring in the corner.

"I love these sorts of games. The big crowd, the physical contest - it's why you play rugby."