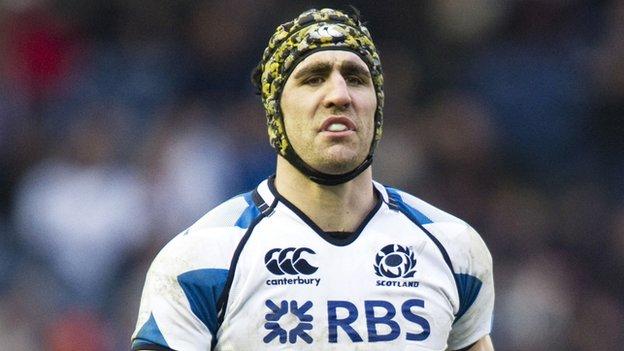 Scotland captain Kelly Brown believes the side can win two consecutive Six Nations games for the first time since 2001.

The Scots, buoyed by victory over Italy, host Ireland at Murrayfield on Sunday.

"We're expecting an incredibly tough match but you have to back up every single week," Brown told BBC Scotland.

"There's no point in having one good week and then not doing it the following week."

We've only won one game and, as we've said, haven't won back-to-back games for years

The Scots impressed in the 34-10 win against the Italians and Brown is keen to capitalise on that momentum.

But he warns the Irish will be a step up in class and that Scotland will need a better overall display.

And Brown feels Ireland are a team full of top players, referring to Brian O'Driscoll as "a legend of the game".

"It's something we've spoken about and we're working as hard as we can to ensure we put in a really good performance on Sunday," said Brown.

Scotland have identified four key areas to work on in training, the captain added.

"If we can get those areas right and win them, then nine times out of 10 we'll win the Test match," he explained.

"I can see the players' individual skill levels improving all the time. If we're all improving individually then that puts us in a better place as a team."

Asked whether Scotland can win the Six Nations this year, Brown added: "If you look at the table then it's clear to see that we're in it.

"But we've only won one game and, as we've said, haven't won back-to-back games for years.

"It's getting ahead of ourselves if we start to say that; we're just looking to the game on Sunday and need to ensure we perform at a level to give us a chance in that game."