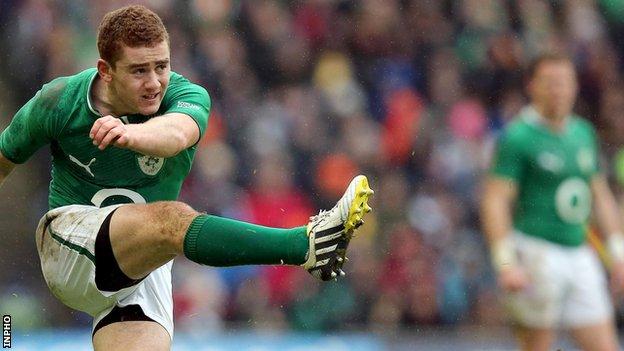 Ireland coach Declan Kidney has defended Paddy Jackson after the fly-half came in for criticism after Sunday's 12-8 defeat by Scotland.

Jackson missed two penalty attempts and failed to convert Craig Gilroy's try, but Kidney said that was not why Ireland lost a game they dominated.

"It is too easy to put it down to the place kicking. We created a lot of try-scoring opportunities," he said.

"I thought the rest of Paddy's game was good and strong for us."

Kidney added: "Paddy had a big influence in the line breaks - that is why we picked him. We knew he would bring that to our game.

"Unfortunately, some of the place kicking went stray but it was more the other opportunities which cost us.

"We have to regroup and take this adversity on the chin.

"We have to learn how to win out these tight matches because it was six points against England and four here.

"We can knock on the door in these matches, but we have to learn how to finish them off.

"It is a disappointed dressing room, we take it seriously. It is difficult at the moment because we know we went a lot of the way there but just didn't finish it off."

Kidney is bound to face a lot of media criticism, having lost two out of three in the Six Nations and with the wounded French next up in Dublin on 9 March.

"I will take a good look at myself. I will get the others around me to critique everything I am doing because nobody is immune from this," the former Munster and Leinster boss said.

"Everybody will take a look at it and then move on to the next one."