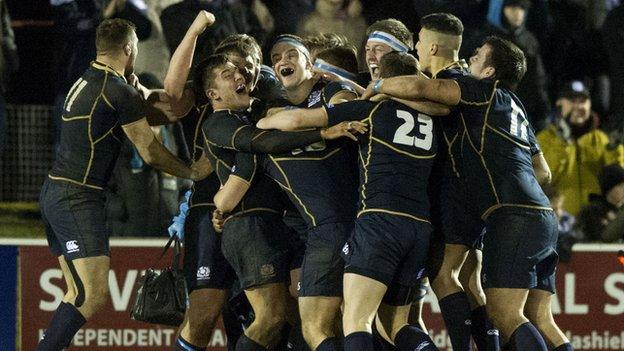 Damien Hoyland scored two tries as Scotland left it late to edge out Ireland 21-20 at Netherdale in the Six Nations Under-20 championship.

The Boroughmuir winger plunged over for his second score eight minutes from time, with Tommy Allan converting.

The Irish won a penalty try after the interval but could not hold on.

Talking to the Scottish Rugby website, he added: "This team has character and belief and they realised that you don't sit back when things aren't going your way; you step up and turn the screw.

"The lesson we must take away from tonight is that you don't let teams come back into the match.

"There is no reason now why we can't keep the momentum going and and beat Wales and France and go on to win the Under-20 6 Nations for the first time."

Ten minutes had passed when a grubber from Robbie Fergusson sat up perfectly for Young to score.

Daly knocked over a penalty but it was his stray pass that Hoyland snaffled up to race through and touch down.

However, just one point separated the teams at the interval as Murphy and Panter found gaps in the home defence.

With the visitors enjoying a good spell of pressure, Scotland flanker Will Bordill was sin-binned for slowing the ball down.

Soon after, Ireland were awarded a penalty try as the outnumbered home defence buckled at a scrum.

However, Hoyland scored again when the ball was worked to him from a line-out and Allan curled over a difficult kick to build on the previous 30-17 victory over Italy.