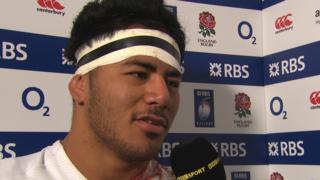 England head coach Stuart Lancaster was pleased with the "composure" and "tempo" shown by his team, as they beat France 23-13 in their Six Nations clash at Twickenham.

The away side were leading 10-9 at the interval after Wesley Fofana's breakaway try - but a try from Manu Tuilagi helped to guide the hosts to victory.

Speaking after the game, Tuilagi says that the "great chase" from his England team-mates was the catalyst for his try in the second-half.