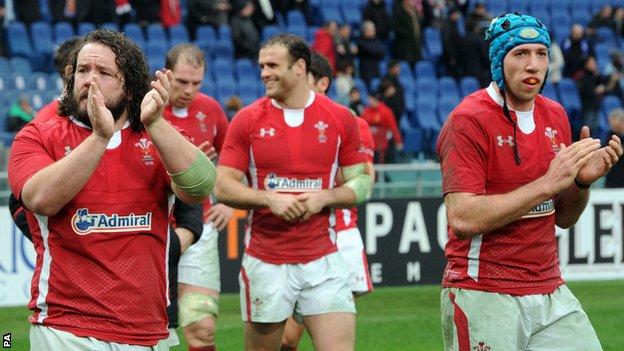 If the sign of a good team is the ability to chisel out victories on hostile foreign fields, then Wales - at least in Europe - are on the right road again.

A fourth successive Six Nations away win, the first time they have managed such a run since the late 1970s, is a powerful riposte to those quick to consign last year's champions to also-ran status.

If they can add Edinburgh to the list on 9 March, they would match the five-match away run compiled by England's World Cup winners from 2002 to 2004. Only France, with six in a row from 2003 to 2005, have done better since the tournament expanded in 2000.

Of course, Wales' biggest test in this campaign is likely to come at home, where they have lost their last five Tests, with England's visit on the final day.

But their latest victory, a 26-9 triumph over Italy, did more than just dim the memory of those eight straight defeats that bit further.

Combined with England's win over France, it keeps alive the tantalising prospect that both sides could be going for the championship in Cardiff on 16 March, even if it is reasonable to expect that England will extend their points difference advantage (currently +36 to Wales' +19) in the penultimate round of matches, with Italy next up at Twickenham.

The winner of Sunday's Scotland-Ireland encounter at Murrayfield will also retain a stake in the title outcome, for the next round at least.

Alas for Italy, the optimism borne of that opening win over France has swiftly evaporated.

Without their stand-out player, the suspended Sergio Parisse, any victory for the remainder of the Championship was going to be a tall order.

But with the rain lashing down, a near-60,000 crowd dripping with the 'passione' spelt out at the top of the seating areas in all four corners of the Stadio Olimpico, and the dreadful conditions inhibiting any thoughts of expansive rugby, it appeared a perfect storm was waiting to hit Wales.

The opening moments - with hooker Richard Hibbard failing to locate a target with either of his first two line-out throws - only added to the impression.

But they proved to be the only blemishes in that department, while the real set-piece revelation came in the scrum, traditionally an Azzurri weapon of choice.

Wales had looked vulnerable in Paris, albeit on a pitch cutting up underfoot, and conceded a series of penalties.

It was all a bit unedifying for their tight-head cornerstone Adam Jones, who took it rather personally.

"The players took a lot of ownership with regards to making improvements in that area, none more so than Adam," explained forwards coach Robin McBryde.

"The extra amount of work he has put in over the last week or so really paid dividends. A lot of it was technical but he was also a lot more vocal in terms of asking more of others as well.

"But that is not to take away from the whole collective effort, because that is what a scrum is. As an eight, they really stood up and exerted a lot of pressure - legally so - on Italy."

Certainly the five-minute spell in the first quarter when the Azzurri pack were three times driven backwards will be recalled fondly by the Welsh front row, and Leigh Halfpenny collected nine points from scrum penalties. Although six of Italy's points came from the same source, the damage - psychological and physical - Wales inflicted by targeting one of Italy's strengths was significant.

"I don't profess to know a lot about it but there are six very happy 'lumpers' [front-rowers] in our changing room after a good day at the office," said captain Ryan Jones.

One of them, Gethin Jenkins, was forced off with a pulled calf muscle five minutes into the second half, putting his participation at Murrayfield in doubt.

But like England, Wales now have strong replacement options in most areas and Paul James, apart from conceding a penalty, was a forceful presence in his 35 minutes on the field.

The Bath prop carried the ball seven times, second only to the indefatigable Toby Faletau, who racked up another dozen forays to go with the 29 he managed in the opening two rounds.

A 95% success rate, and a second consecutive 'clean sheet' reinforced the impression that Wales have recovered the defensive solidity on which their last two Grand Slams were forged, their greater line speed and technique at the tackle area forcing eight turnovers into the bargain.

Howley can also now select from a position of strength in the second and back rows. Alun Wyn Jones had a productive half-hour back in the Test arena, but it would be harsh on the unheralded Andrew Coombs, a revelation in his first three Tests, were he not to start again at Murrayfield.

Sam Warburton, meanwhile, only appeared for the final 11 minutes here. Given it was Ryan Jones rather than Tipuric he replaced, and Jones drew Howley's praise for the way he led the side again, it seems the recently deposed skipper may have to bide his time on the bench a while longer.

The decision to confirm his starting side a week early, thus avoiding a lengthy period of speculation over Warburton's participation as well as giving the side that won in Paris more training time together, certainly appeared to pay off. Wales were focused, energised, disciplined and played the conditions better in a tactical affair featuring 84 kicks from hand, 43 of them by the visitors.

The words that cropped up in the post-match dissection - composure, patience, clinical, adaptability, maturity - spoke of a side rediscovering some of the best of itself, with the promise of more to come.