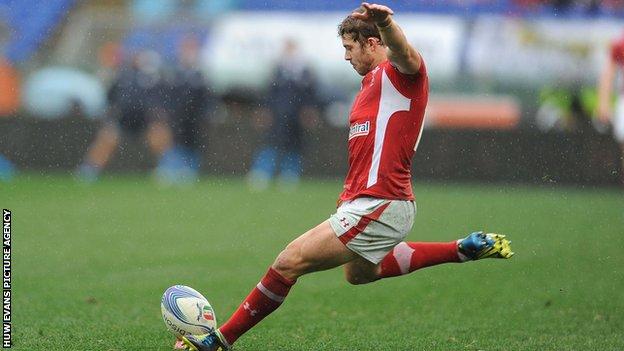 Davies says Halfpenny has been "amazing" for Wales, but says Hogg's attacking ability is superior.

But ahead of Wales going to Scotland in the Six Nations on 9 March, Davies told Scrum V: "Hogg gives an advantage.

"Attack-wise, he is brilliant and he's got pace. He just has a little bit extra in attack."

Halfpenny kicked six from seven attempts at goal as Wales won 26-9 over Italy in Rome in the third round.

His efforts left Davies' fellow BBC rugby pundit and former Lion Jeremy Guscott in no doubt that Halfpenny should occupy the number 15 jersey when the Lions take on Australia over three Tests in the summer.

"If there's one criticism I have of Halfpenny it's coming into the line of attack, which I think [Ireland's Rob] Kearney does better.

"Hogg - he's making a great case. His first two [2013 Six Nations] games were stunning. Against Ireland he was a bit quiet.

"He will probably start as the Lions' front-line kicker ahead of Sexton because of his high percentages."

Nicol favours Hogg, but admits the selection at fly-half is key because it affects the goal-kicking choice.

"That could go against Hogg… but he could be devastating with creativity around him," said Nicol.

"If [England's Owen] Farrell gets 10, he's the goal-kicker and that takes away one of Halfpenny's credentials.

Wood said: "For me, it's Hogg. I just think he is lightening and he does get into the [attacking] line as quickly as he possibly can."

Amid the debate that is destined to continue until the Lions tour is over, Wales defence coach Shaun Edwards highlighted Halfpenny's kicking as "everything that is good about this young and talented Welsh team".

Edwards said: "I was watching him in the warm up and I was thinking that I don't think I have ever seen anyone kick a ball as far and as accurately as this guy in all my time in rugby.

"The one he missed, his kicking tee slipped and that was the reason he missed it.

The Cardiff Blues full-back's 11 points from the boot were important in ending Wales' eight-match losing streak with the 16-6 win over France in Paris on 9 February.

Centre Jonathan Davies and wing Alex Cuthbert scored tries in Wales' victory in Rome that sees them second in the Six Nations table, behind unbeaten England.

Edwards was pleased with Wales' performance in torrential rain in Italy, particularly the fact that they did not concede a try for the second game in succession in the championship.

"If you'd come up with that score-line when I saw that rain in the morning, I would have bitten your hand off," said Edwards.

"It was such a wet day and we knew there were going to be a lot of scrums and I thought our scrum was outstanding.

"I don't understand the scrum, but it was quite harsh when we were so dominant in the scrum.

"Whenever we don't concede any tries I am usually pretty happy."

Scotland maintained their hopes of winning the title with a battling 12-8 win over Ireland at Murrayfield on Sunday.

Edwards added: "It's a beautiful city Edinburgh and everybody loves to visit it, but it's a difficult place to play rugby.

"I am sure the Scots will be pumped up, but so will we."