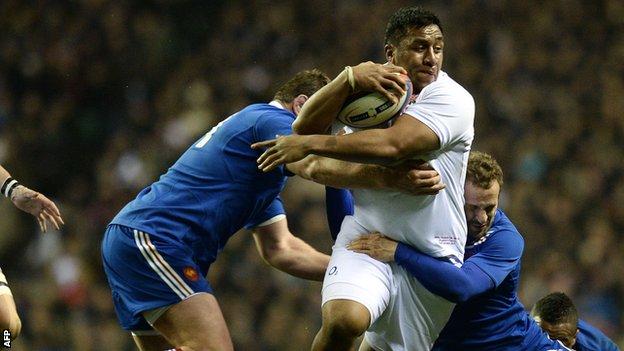 Well, there can be no hiding it now.

After England's slogging, slugging 23-13 victory over an improved yet still flawed France, the words 'Grand Slam' are out in the open and set to run free.

This is no insult to Italy, who visit Twickenham in a fortnight, nor a red rag to the red-shirted Welshmen who lie in wait in Cardiff a week further on. No-one, least of all England's pragmatic coaching team, is assuming anything is yet won in this most combative and unpredictable of competitions.

But the possibility is now out there, both in the stark mathematical sense of three games won and in the sporting style that England have passed that trio of very different examinations.

Nothing about Saturday's win was easy. "A proper Test match", in the words of Stuart Lancaster, it was a ferocious physical battle that saw shirts bloodied and lungs emptied. "It was brutal, and it was always going to be brutal," said his defence coach Andy Farrell with relish.

It shows great level of maturity for a young side with 200 caps between them, playing a side that has been to a World Cup final and has 500 caps, to come through that

On an evening so cold the shivers froze on your timbers, under assault from a far more battle-hardened arsenal, they nevertheless found a route to victory just as they had in the pouring rain of Dublin two weeks ago.

At half-time, the point deficit to France understated the gap between the two sides.

The French were on top in the scrum and prospering in the line-out. Their back row was winning the breakdown battle (they would make seven turnovers to England's two) and in Louis Picamoles they had the stand-out go-forward man on the pitch (he would finish with 17 carries, almost double the number of any of his team-mates).

As toothless as a cockerel in defeat to Italy and Wales, with the dashing Wesley Fofana restored at centre they had a cutting edge to slice through any defence.

By missing tackle after tackle England made it easier for them. Fofana escaped at least four en route to his high-stepping solo try; 21 were missed overall, several by Courtney Lawes, who in trying to prove himself a natural fit at blind-side perhaps inadvertently did the opposite.

That a contest being bossed by Les Bleus ended all white on the night had much to do with the changes that coaches and players decided to make.

A minute later France coach Philippe Saint-Andre made his own fateful play, withdrawing the perfectly steady Francois Trinh-Duc and replacing him with the embodiment of mercurial Gallic instability, Frederic Michalak.

England's scrum was immediately sturdier, the defensive pressures alleviated by the rumbustious carrying of Youngs and Vunipola and the breakdown balanced by Haskell's more specialist skills. France, by contrast, were weakened and wobbled.

Trinh-Duc was not the only man supplanted by an inferior force. Thomas Domingo, Nicolas Mas and Morgan Parra also left holes that were only partially filled.

But if Parra had performed his role as le petit general, Michalak instead played Bad Lieutenant - his runs disappearing down cul-de-sacs, his passes going nowhere.

France were not necessarily more indisciplined than England. Lancaster's men gave away more penalties. But they did so well way from their own posts, while French transgressions offered seven kickable attempts, six of which Owen Farrell and Toby Flood took.

Lancaster had predicted that the last 20 minutes would prove pivotal, and in that tense final quarter his key men delivered.

Tom Wood, driving onwards with the ball, driving others backwards without, had what forwards coach Graham Rowntree described afterwards as his finest game in an England shirt. Chris Robshaw's 16 carries told their own tale of his ability to lead from the front. And in making 15 tackles, Joe Launchbury was an exemplar of this team's youthful resolve.

Outside them, Manu Tuilagi's supremacy over Mathieu Bastareaud, the man whose very name sounds like a muttered curse, was by the end unarguable.

Tuilagi made 57 metres with ball in hand, more than any of his team-mates, but it was the manner of those metres - bulldozing dents in the French rearguard, sucking in defenders to frantically fill the breaches - that did the damage.

If there was fortune in his second-half try - Vunipola appeared to be accidentally offside as the ball was clattered from French hands - and 19 stitches threaded into his torn left ear, his impact over the 80 minutes was unrelenting.

"It shows great level of maturity for a young side with 200 caps between them, playing a side that has been to a World Cup final and has 500 caps, to come through that. There was no panic. The ability to problem-solve and come out on the right side is a great skill to have."

For France and Saint-Andre, an autumnal advance has turned into a nightmarish winter retreat.

They have now lost six of their last seven battles with England in the Six Nations, and more pressingly have been beaten five times on the bounce in this tournament for the first time in over half a century.

Saint-Andre cut a dejected figure afterwards, well aware of the grilling he can expect back home after being chewed up by such tender Rosbifs. "We were penalised a lot," he said sadly. "I don't know why."

Bottom of the table, with a trip to Ireland to come, there is every chance they will go into the final weekend needing to win to avoid the wooden spoon. Even then it may not be enough.

England's rejuvenated supporters, meanwhile, can dream on. So too can Welshmen, for whom the prospect of denying Lancaster's men a Grand Slam at the death is not a great deal less sweet than winning one themselves.