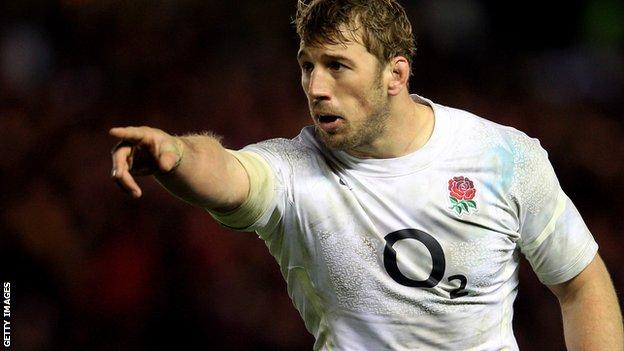 Mike Tindall believes England captain Chris Robshaw will be the top contender to lead the British and Irish Lions if he wins the Grand Slam.

England need to beat Italy at Twickenham and Wales away to complete their first Grand Slam since 2003.

"It is tough at the moment to pick who will get that job," former captain Tindall told BBC Radio 5 live.

"If we go in with a Grand Slam-winning team, he [Robshaw] will be hard-pushed not to be a number one candidate."

A number of names have been put forward for the role in Warren Gatland's side who travel to Australia this summer, including Ireland's Brian O'Driscoll and Jamie Heaslip.

However, his reign has not been without criticism - he came under fire for his decision to go for goal when England were trailing South Africa 16-12 with just over a minute remaining in November.

But he recovered to lead England to a famous 38-21 win over New Zealand in December before retaining the captaincy for this year's Six Nations and England are on the verge of a Grand Slam after wins over Scotland, Ireland and France so far.

Martin Johnson captained England to World Cup glory and their last Grand Slam victory in 2003 and Tindall, who played in that team, believes Robshaw can also become a great leader for his country.

He said: "Chris Robshaw's level of performance is so high every week you can always follow him.

"Jonno was exactly the same. He was not a a massive talker or shouter but just led from the front.

"If you looked at Jonno and played half as well or same level you knew you would have a good game and be doing the right things.

"The leadership aspects with Chris are still growing. If Chris can keep playing at the level he is week in week out he will ultimately get to that level and become a great captain for England."