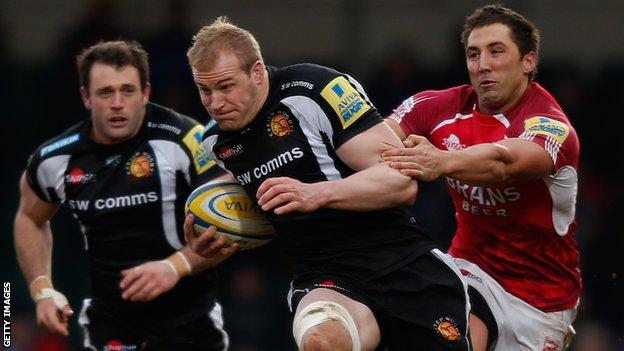 The victory was a first league win for the Chiefs since the start of December as they consolidated eighth place in the Premiership table.

"It's not like everything in the garden has become rosy," Baxter said.

"It's an important win but there's still a hurtful loss at Sale that still rankles with me, and a few issues from Saracens that were disappointing."

He added: "We mustn't forget about those things - they don't disappear because of a good performance."

Baxter also says he was pleased with the way his side took their chances, as they ran in five tries at Sandy Park against an Exiles team that are just three points above bottom club Sale.

"We've been working a lot on getting those last passes in and making things happen, and that's what happened," he told BBC Radio Devon.

"We got the ball to the right areas a lot better than in the past.

"Those opportunities have been there in a lot of games, with a man on the outside free to run in tries and we've failed to get the ball there.

"It shows that when a couple go in a game breaks up very quickly, and that could have happened to us in other games this season."

The Chiefs travel to leaders Harlequins at the weekend and Baxter hopes his side can maintain the same focus in training as they did last week.

"We've got to make sure we turn up on Monday and address things in the same manner as we did this week," he said.

"We had a good training week, the guys were really focused and worked hard and set themselves some basic goals.

"We have to make sure our mindset is the same and we work hard."