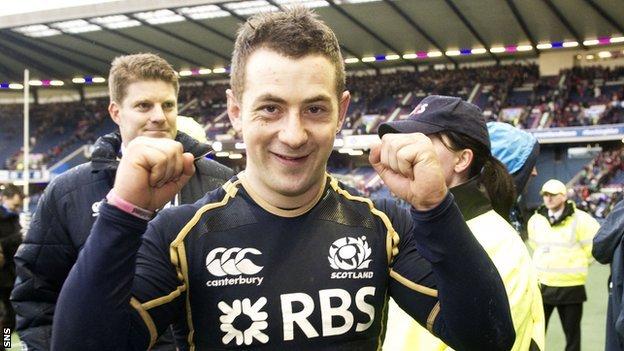 Laidlaw's penalties accounted for all the Scots' points in their their second Six Nations triumph in this year's campaign.

"I think he does deserve the job," said scrum-half Laidlaw of the Australian.

"A lot of credit should go to him and the coaching team. They are striking a good balance between training and a bit of down time off the field."

And Laidlaw, 27, speaking to BBC Radio Scotland from his home in Galashiels, added: "The boys are really responding to it.

"Training has been really sharp. That's the main reason why we are producing better performances."

The Borderer described the backs-to-the-wall win over the Irish as "probably right at the top of the tree" in terms of career highs.

However, he warned that people should remain calm about Scotland's resurgence on the rugby pitch, despite the contrast in form with recent years: two wins out of three in this championship; two wins out of 15 matches in Scotland's previous three campaigns.

"The boys are extremely happy coming away with a result from yesterday," he said.

"Between that and the Italy game, it gives us two wins and puts us in a strong position, but we are not getting carried away.

"There is a lot of room for improvement, especially on the back of yesterday's performance, because we hardly touched the ball.

"Credit to our defence but we don't want to be hanging on like that in every Test match.

"We'll go away and work on our attack patterns and holding on to the ball and trying to put some pressure on the opposition."

Scotland have never won the tournament since the Five Nations became Six. They sit on four points after three matches, the same as Wales, but two points behind unbeaten England.

Asked if he believed the team could win the championship, Laidlaw replied: "As a group of players we believe we can win it but it's one game at a time.

"England are playing well and I can't see Italy beating them next week. They need to go to Wales on the last weekend.

"If we do our job right we'll give ourselves every chance.

"We still need to get past Wales. That will be a very tough Test at Murrayfield, then we have one of the toughest Tests after that, in Paris."

Meanwhile, Laidlaw's Scotland and Edinburgh team-mate Ross Ford has had stitches inserted in the facial wound he suffered at Murrayfield that forced his substitution in the second half.

However, the Scotland medical staff are confident the hooker will be fit to play Wales a week on Saturday.

In spite of sustaining a facial injury which required multiple stitches, hooker Ross Ford should recover in time for Scotland's next outing in the RBS 6 Nations Championship - against Wales at Murrayfield on Saturday week.

Scotland team doctor James Robson said on Monday: "He received multiple stitches to the wound and was able to return to the team hotel last night.

"Our expectation is that with ongoing good care and attention to the wound, Ross should be available for consideration for the Scotland v Wales game.

"Despite the rigours of yesterday's Test match, the rest of the squad appears in rude health today.

"As usual, they will continue to be medically monitored over the next few days."