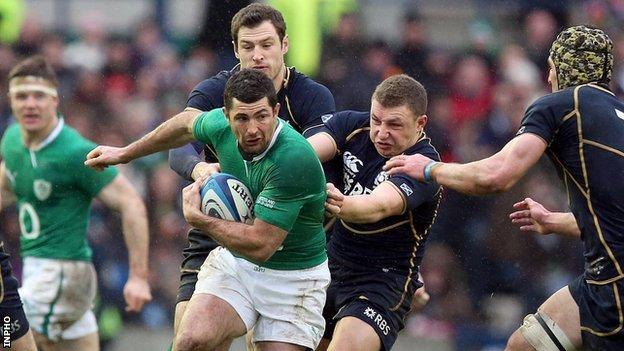 Ireland full-back Rob Kearney has said that the players and not coach Declan Kidney must bear the brunt of the criticism for the country's troubled Six Nations campaign.

Kidney's Ireland deal runs out after the Six Nations and he is under mounting pressure after successive defeats by England and Scotland.

However, Kearney says the players must be held accountable for the losses.

"The coaches can't make that final pass for you," said the Ireland full-back.

The Irish suffered an infuriating 12-8 defeat at Murrayfield despite completely dominating possession for the vast majority of the contest with Scotland on Sunday.

"On a day like that when we had so much possession and created so much, the blame has to be on the players," added Kearney.

"The players must take responsibility and must bear the brunt.

"The guys were happy with the game plan and how we were playing the game. We created opportunities.

"The stats show that we played the right way. It was just one of those days when you can't really explain things.

"It was very disappointing as we should have won and as a team we have to take responsibility for that."

But despite Kearney's comments, Kidney's chances of being offered a contract extension beyond the summer appear to have suffered major blows because of the back-to-back defeats.

Kidney's shock decision to remove the captaincy from Brian O'Driscoll and give the job to Jamie Heaslip heaped additional pressure on the coach prior to the Six Nations.

All seemed well as the Irish withstood a second-half onslaught from Wales to win the opener at the Millennium Stadium but Heaslip's on-field leadership has been criticised following the subsequent defeats.

We're all in this together. We must make a statement for Declan, for ourselves and the country

The Irish now face the task of playing a France side that showed clear signs of improved form in Saturday's 23-13 defeat by Grand Slam-chasing England at Twickenham.

"It's a massive two weeks ahead of us now," admitted Kearney.

"We need a big statement against France for ourselves, the jersey and our country. People deserve more.

"It doesn't help that France are zero from three. They will come over as a wounded animal, but we have to be more of one. We really need to fight hard and win that game.

"Losing to England and Scotland has put huge emphasis on this match. A lot is riding on it.

"We're all in this together. We must make a statement for Declan, for ourselves and the country."

Sexton was ruled out of the Scotland match by a hamstring injury and it is not clear whether he will be in contention to return against the French at the Aviva Stadium.