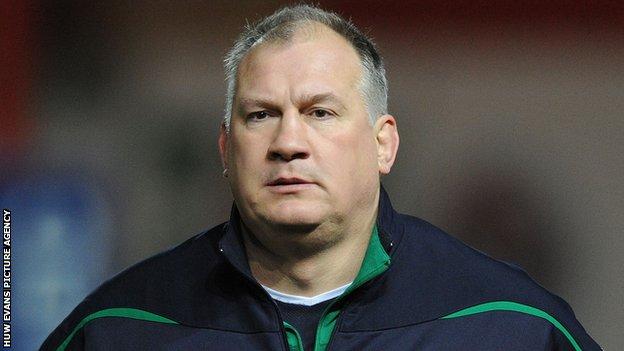 Ruddock, Wales' Grand Slam-winning coach in 2005, has been impressed with Stuart Lancaster's unbeaten side.

But he insists England will not have it all their own way when they face Wales in the Six Nations finale at the Millennium Stadium on 16 March.

"As good as England are at the moment the real test for them will be going down to Cardiff to try and get a result," he said.

"I think Stuart Lancaster's done a fantastic job and there are some good coaches around him.

"Having said that Wales always pick their game up against English teams and particularly in Cardiff."

After losing to Ireland in their opening game, Wales are second in the Six Nations after back to back wins in France and Italy.

And Ruddock, who now coaches Ireland Under-20s, says interim coach Rob Howley has selection headaches before naming the side to face Scotland at Murrayfield on 9 March.

Captain Sam Warburton is back in contention for the penultimate game after featuring as a substitute in the 26-9 victory over Italy in Rome.

But with Ospreys flanker Justin Tipuric impressing in the opening matches, Ruddock concedes Howley is doing the right thing in biding his time over the next team selection.

"It just depends on how Rob would want to use those guys and obviously at the expense of who goes out and who drops out," Ruddock added.

"It's good coaching policy not to ignore all of your options and not rush into anything this week."