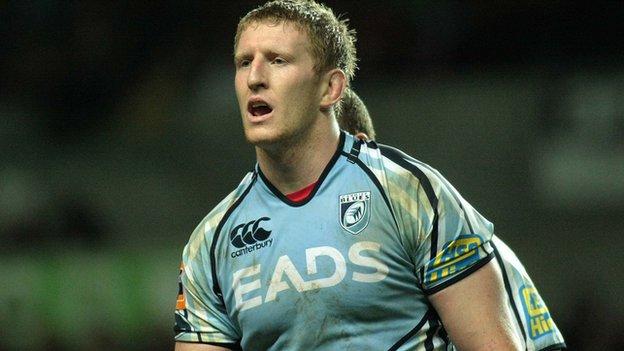 Cardiff Blues remain unsure over whether Wales lock Bradley Davies will return from injury to play this season.

Davies, 26, has been sidelined with an ankle ligament injury suffered in Blues training in January.

He has been ruled out of the 2013 Six Nations, but could return to action as the Pro12 season comes to a close.

"He may be back for the last couple of games of the season, or he may not," said Phil Davies, the Cardiff Blues director of rugby.

Davies has had a protective boot removed, but is still a long way from returning to Blues training.

"He has come out of his boot today, but it's a couple of months' time that we are expecting him to be potentially be back," said Davies, the Blues coach.

"It may be the last couple of the games of the season, if that.

"He is progressing well and he is doing his rehab very diligently."

Davies spent most of Wales' 2012 Grand Slam campaign on the sidelines after being banned for a tip-tackle in their opening win against Ireland in Dublin.

After being felled by New Zealand hooker Andrew Hore on 24 November in Cardiff, 6ft 6in, 19st 2lb Davies was ruled out of Wales' 14-12 defeat by Australia a week later.