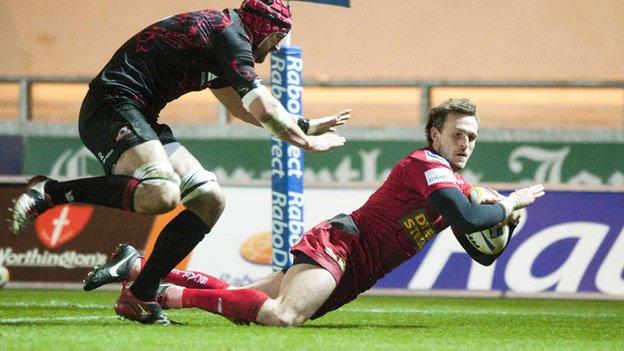 Scarlets hung on for a narrow win over battling Edinburgh to leapfrog the Ospreys in the Pro 12 League.

But they had to survive a late scare when Hamish Watson broke away, only to be brought down by Owen Williams.

It was Williams' second half penalty that gave Scarlets the win after Andy Fenby had scored a try and Aled Thomas kicked two penalties.

It was Edinburgh's 11th consecutive defeat in all competitions, though in truth the Scarlets almost let them off the hook.

The Welsh region dominated the second half, but replacement fly half Williams missed three kicks at goal.

And the Scottish team's defence was magnificent, while the Scarlets lacked composure in attack.

The home team made a powerful start but had to make do with an Aled Thomas penalty after Edinburgh repelled a series of drives by the forwards.

They went further ahead in the 14th minute as Andy Fenby took an inside pass from Thomas and sprinted over from 40 metres.

Edinburgh hit back with a penalty by Harry Leonard after Dave Denton had been held up just short of the home line.

And Leonard was the instigator as Edinburgh moved into the lead in the 22nd minute, his superb pass putting right wing Dougie Fife outside the home defence for a well-worked try. The fly half converted to put Edinburgh ahead by 10 points to eight at half time.

Edinburgh stretched their lead when Leonard kicked a penalty from in front of the posts after former Wales scrum half Richie Rees caused chaos in the home defence.

Thomas pulled three points back for the Scarlets with a simple penalty after Edinburgh held out as the home team went through 22 phases of possession.

THe Scarlets were well on top, but Owen Williams missed two penalties.

However, referee Giuseppe Vivarini lost patience and sent Fife to the sin-bin, though again Williams missed the shot at goal.

But he was on target in the 67th minute to put the Scarlets back into the lead.

And in a frantic last five minutes, Edinburgh would have stolen a victory but for Williams' superb tackle on Watson.