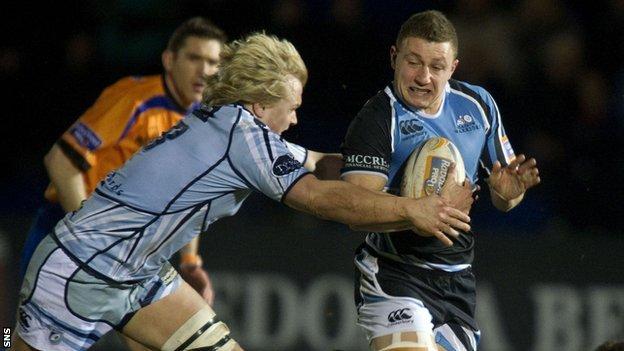 Glasgow Warriors claimed a bonus-point win against Cardiff Blues to move top of the Pro12.

Fly-half Weir took his personal tally for the evening to 14 with three conversions and a penalty.

Josh Navidi registered Cardiff's only try in the first half, with the boot of Rhys Patchell securing a further eight points for the visitors.

Glasgow's win and means that the top two sides have 61 points after 17 fixtures.

However, Ulster have an inferior points difference and slip to second place.

The Glasgow pack, reinforced by the return of Scotland squad men Jon Welsh, Pat McArthur and Al Kellock, made a slow start and lock Tim Swinson had to be replaced by Tom Ryder early on.

Matawalu, DTH Van Der Merwe and Alex Dunbar began to inject some tempo and the pressure paid off when Horne carved through the centre on a 30-metre run and Weir converted the opening score.

But the Warriors failed to make anything of further attacks and were punished when Cardiff drew level.

Luke Hamilton's forceful play took them close to the line and Navidi got over, Patchell adding two points with the conversion.

A further injury blow interrupted Glasgow's rhythm as Gordon Reid made way for Ofa Fainga'anuku and Patchell kicked two penalties to Weir's one as Blues went in 13-10 up at the turnaround.

But Cardiff failed to add to their tally and fell behind when Matawalu retrieved his own long kick to touch down, Weir adding the extras.

A prolonged phase of possession close to the line preceded Weir's try and the Scotland cap's final contribution was to kick his third conversion of the evening.

Matawalu then finished in style after a tap penalty was moved swiftly to the right but substitute Scott Wight failed to convert.

Townsend's men seal a sixth straight Pro12 win, with a bonus point claimed in each of the last five.