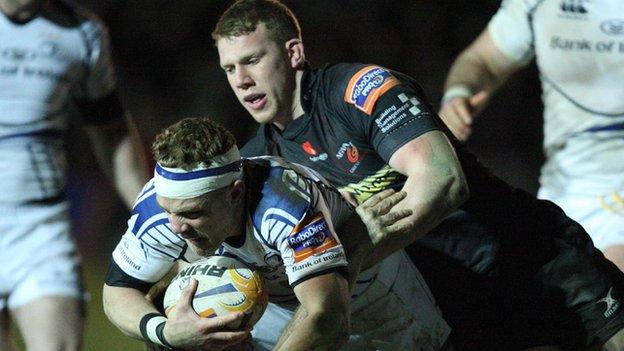 Leinster picked up a bonus point at the Dragons as they strengthened their position in the top four of the Pro 12.

Two tries for Sean Cronin in the opening 10 minutes put the Irish province in control, and wing Dave Kearney added two himself to clinch the extra point.

The Dragons picked up a losing bonus with tries by Ieuan and Steffan Jones, who also kicked two penalties and a drop goal.

Leinster got off to a flying start with hooker Sean Cronin bagging two virtually identical tries in the first six minutes in the left hand corner, well-timed passes from first Fionn Carr and then Fergus McFadden giving Cronin the overlaps, with Ian Madigan converting the first.

Steffan Jones landed a penalty in between the two tries, but Leinster dominated possession and territory in the first quarter.

Leinster scored their third try after 19 minutes when Rhys Ruddock's burst from a scrum split a shaky home defence to hand Dave Kearney a simple finish in the right hand corner, Madigan again converting for a 19-3 lead.

Steffan Jones pulled back a second penalty on the half hour, but with the visitors continuing to threaten with ball in hand, teenage centre Jack Dixon was yellow carded for killing the ball.

Despite their numerical disadvantage Jones landed a drop goal to reward his forwards' efforts and make it 19-9 at halftime, though visiting captain Shane Jennings complained bitterly of some vigorous rucking on him in the build-up.

The home side came out firing after the break with some purposeful approach work resulting in number 8 Ieuan Jones getting his first league try from close range.

But the visitors continued to enjoy the better of the territorial battle as the match wore on and eventually notched up the bonus point after 64 minutes with McFadden putting Kearney over for his second, Madigan converting from wide out.

That took the steam out of proceedings amid a series of replacements, and it was the Dragons who earned some respectability with a rare attack in the closing moments for Steffan Jones to gain them a losing bonus point.