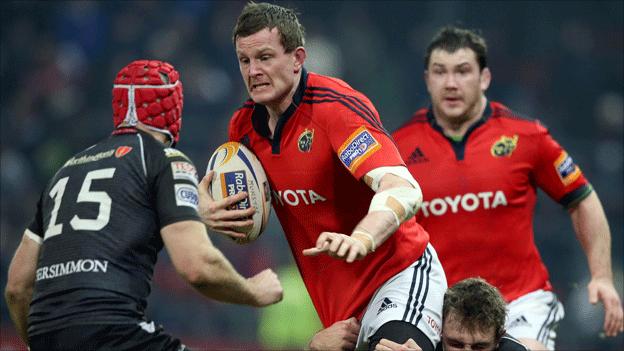 The sides were level at 6-6 at half-time thanks to two penalties each from Ronan O'Gara and Matthew Morgan.

Damien Varley scored a try for Munster on 44 minutes, with O'Gara converting, and then Jonathan Thomas touched down on 51, Morgan adding the two points.

The draw sees the Ospreys remain fifth in the standings, one point behind the Scarlets, while Munster lie sixth, with their hopes of a play-off place fading.

O'Gara edged Munster into an early lead with a penalty from near the touchline with just four minutes on the clock.

Ospreys were superior for much of the game and exerted most of the pressure early on, with 20-year-old fly-half Morgan landing two penalties.

An O'Gara penalty before the break levelled the scores for the Irish province.

Damien Varley barged over the line for Munster's only try of the game with the help of his fellow forwards and O'Gara maintained his 100% record with the boot.

Prop Stephen Archer was sin-binned for tackling James King without the ball and Ospreys took advantage of their extra man by crossing the line after a rolling maul from a lineout.

Number eight Thomas emerged with the ball and Morgan knocked over an outstanding conversion from the left touchline.

The Welsh visitors looked the more likely to secure the victory, but were unable to turn their territorial advantage into further points.

In the final play, O'Gara was set up for a long range drop goal which tailed away to the right of the posts.

Not used: S Dougall, I Dineen.