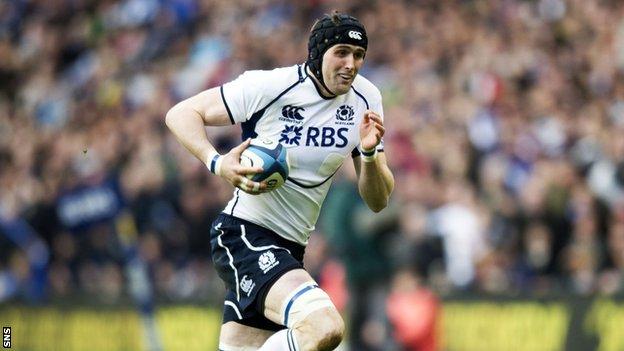 Scotland back-rower Richie Vernon is to return to Glasgow Warriors next season, the club has announced.

The Dundee-born 25-year-old has signed a three-year-deal at Scotstoun after spending the last two seasons playing Premiership rugby with Sale Sharks.

Now with 20 caps, versatile Vernon made 48 appearances for Warriors between 2007 and 2011 before moving south.

"Richie has a game that will fit very well with the style of rugby we're developing here at the Warriors," added Townsend.

"He has the ability to play in all three back-row positions and is highly motivated to become a better player.

"He will provide another option amongst some very talented back-row players, each of whom know they have to keep working hard to earn their place in the side.

"He has a lot of international experience and has played at a high standard over the last couple of years in the Premiership, so we're very pleased he will be joining up with us in the summer."

He said: "I have learnt a lot from my time at Sale over the last couple of seasons but this is an excellent opportunity for me to return home and play my rugby in Scotland.

"Of course it helps that I know a lot of the guys in the squad already, but I've been watching their progress this season and it's a very exciting time to be getting involved with the club."