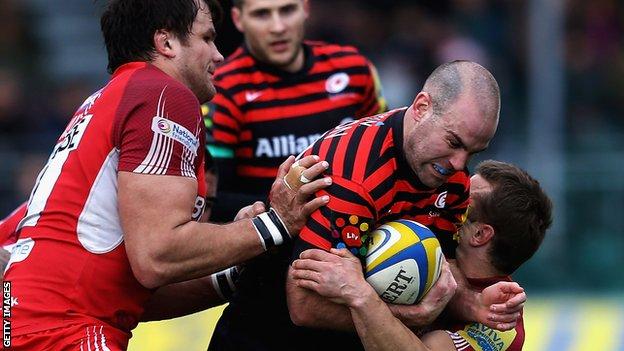 Saracens replaced Harlequins at the top of the Premiership standings with a bonus-point win over London Welsh.

A penalty try and three kicks from Charlie Hodgson gave the hosts a 16-11 half-time lead, with Welsh's points coming from Seb Stegmann's try and the boot of Gavin Henson.

Henson's second-half penalty came in between two Sarries tries from Joel Tomkins and Will Fraser.

The winger's score, which added to his double against Leicester last week, gave his side a four-point cushion at the summit of the table.

London Welsh, in their inaugural Premiership season, are just three points above bottom-placed Sale with five games left and face an RFU hearing over an ineligible player on Tuesday

But the result piles more pressure on Welsh, who will find out their fate over the alleged ineligibility of scrum-half Tyson Keats at a Rugby Football Union hearing on Tuesday.

Saracens dominated possession in the early stages and found themselves 6-0 ahead from two Hodgson penalties, although he kicked wide a third after Welsh were penalised at a ruck.

Against the run of play, the visitors scored the game's first try when Julio Cabello's off-load bounced in the path of Stegmann but, with Henson unable to land the conversion, they failed to take the lead.

With winger Phil Mackenzie to the sin-bin, Welsh conceded a penalty try as a Sarries line-out led to a maul that was illegally dragged down.

Their woes continued as prop Tom Bristow was yellow-carded for the offence, but while Welsh were down to 13 men, Henson knocked over a penalty.

However, more mistakes from the Exiles allowed Hodgson to slot another kick before Henson reduced the gap to five points at half-time, with a scrappy drop goal that clipped the crossbar.

Saracens managed to extend their lead in the second half with Tomkins crossing over after a sweeping move involving Duncan Taylor and Hodgson, who duly converted.

Undeterred, Henson reduced the deficit to nine points with a penalty but soon Strettle had found Schalk Brits, whose off-load allowed Fraser to finish in the corner, with the try awarded by the television match official.

The visitors thought they had earned a lifeline when Henson touched down - only for it to be chalked off for obstruction by Tom Arscott in the build-up.

The result was put beyond doubt with eight minutes remaining when Strettle went over.