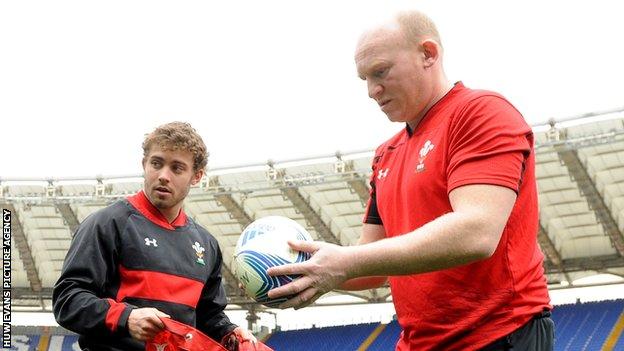 Wales assistant coach Neil Jenkins denies his side are in danger of being distracted by a potential Six Nations title shoot-out against England.

The former record-breaking kicker insists Wales' focus is fully on Scotland at Murrayfield on 9 March.

If Six Nations title holders Wales beat Scotland while England see off Italy it would set up an Anglo-Welsh finale.

The main focus for us is to win our games, starting against Scotland, which is going to very tough

"There is no thought of England a week later. Our focus is on Scotland and about doing a job there." said Jenkins.

"The main focus for us is to win our games, starting against Scotland, which is going to very tough."

Wales and Scotland go into their game on the back of two wins each.

Wales beat Italy 26-9 in Rome while Scotland emerged 12-8 winners over Ireland in Murrayfield.

"They [Scotland] are the same as us - two wins out of three - and it is a home game for them.

"They will fancy their chances against us and then to go to Paris on the final day with a chance of maybe them winning the championship.

"It was an excellent win for them on the weekend against Ireland. People talked afterwards about stats and possession, but if you have got the ball you have got to take your chances.

"Ireland didn't take their opportunities on Sunday, and Scotland kept hanging in there, dug in and kicked their kicks."

If Wales beat Scotland in Edinburgh next week - and England complete what should be a routine Italian job at Twickenham - then it will become a mouth-watering Six Nations finale at the Millennium Stadium on 16 March.

At present England are leading the Six Nations with an extra win than Wales and also have a 17 points difference cushion.

Ahead of Wales' hoped-for fourth win in Edinburgh in five trips Jenkins praised Leigh Halfpenny, man of the match in Italy, for his form in this season's championship.

"He is world class. It's not just his goal kicking, but his all-round game. His aerial skills, he is in attacking threat, he's everything you want, really.

"In tough conditions last Saturday, it was windy and hammering down with rain, those goal kicks he got in the second half were pretty special.

"We know we have got one of the best full-backs in the world. He is up there with [New Zealand's] Israel Dagg, and the like.

"Obviously, [Scotland full-back] Stuart Hogg is a fantastic player and is doing very well for Scotland at the moment, and Rob Kearney is a pretty good player as well. Everyone has got their own views on different players."