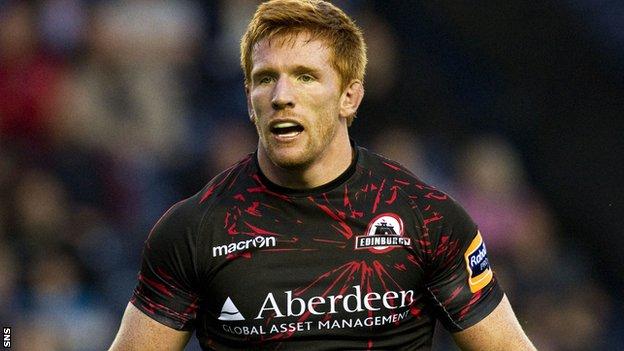 Edinburgh Rugby's Roddy Grant has extended his contract for two years beyond this summer.

The flanker has played 87 times for the club since his 2009 debut.

As a team and a club, we need to rectify an unacceptable season.

"Edinburgh Rugby is my club and I do everything I can, on and off the pitch, to help drive things on," said Grant.

"I'm excited about what we can achieve in the next two seasons. There are some great young players coming through the ranks and bursting on to the international scene."

The 26-year-old is eager to restore Edinburgh's fortunes amid a poor campaign.

They lost all six Heineken Cup games and are struggling in the RaboDirect Pro12.

And head coach Michael Bradley is on his way out after the Scottish Rugby Union's decision not to renew his contract.

Grant said: "This season has been difficult and disappointing from a performance perspective.

"But there's a real sense of urgency among the players and the club to finish this season strong and start the process of getting back to where we believe we can be.

"I'm still looking to improve my own game and feel that Edinburgh is a great place to do that alongside some great players in a good environment, and in the shop window for Scotland selection, which is obviously a huge goal of mine.

"But first, as a team and a club, we need to rectify an unacceptable season.

"It's a real challenge and great source of motivation, it's something I care a lot about and am delighted to be part of it for another two years."