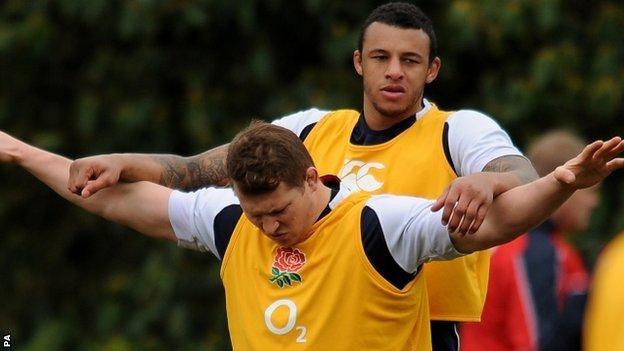 Northampton pair Dylan Hartley and Courtney Lawes, who both started in the win against France, are two of 10 players released from the England squad for this weekend's Premiership games.

The duo were recalled for Saturday's Six Nations clash, but both could lose their starting roles for the next game against Italy on Sunday, 10 March.

Fly-half Owen Farrell remains sidelined having come off injured in the win.

"He probably won't train this week, but we are fortunate to have Toby [Flood] who came on and did well against France.

"This week is partly about recharging our batteries after a tough Test match, but we trained well today [Tuesday] and are in pretty good shape."

Gloucester's Ben Morgan and number eight Billy Vunipola of Wasps are also continuing their recoveries from injuries under a joint club-England medical programme at Pennyhill Park.

Vunipola's brother Mako has not been released, with the Saracens prop in contention to start against the Azzurri having impressed as a replacement during the campaign to date.

Harlequins scrum-half Danny Care will also not be involved with his club this weekend, increasing his hopes of taking the number nine jersey from Ben Youngs.

Leicester hooker Tom Youngs could regain the starting role from Hartley, while Lawes had a disappointing outing at blind-side, so James Haskell could come back into the side.