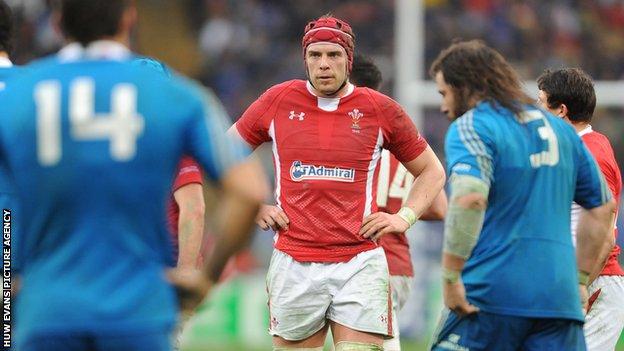 Alun Wyn Jones will continue his comeback from injury for Ospreys on Saturday after being released from Wales' Six Nations squad.

The 27-year-old made his return to the Wales side from a shoulder injury in Saturday's 26-9 win over Italy.

Jones came off the bench in Rome, but the 68-times capped lock has been tipped to start against Scotland on 9 March in place of Andrew Coombs.

Six other players have also been made available to the regions by Wales.

Cardiff Blues will have scrum-half Lloyd Williams, a second-half substitute in all three of Wales' matches in this season's Six Nations, and lock Lou Reed available to face Glasgow on Friday.

And flanker Aaron Shingler, hooker Matthew Rees and full-back Liam Williams are back with Scarlets before their home match with Edinburgh.

Bath prop James is poised to come into the Wales front row against Scotland as a replacement for calf-injury victim Jenkins.

Toulon have confirmed Jenkins is not fit enough to play in the Top 14 on Saturday and Wales are still waiting to hear from the French club on the extent of the injury.

Lock Jones played the majority of the second half against Italy after replacing Coombs, who made his debut in the championship opener against Ireland.

Coombs was given his chance following the injury absence of Jones, Bradley Davies and Luke Charteris.