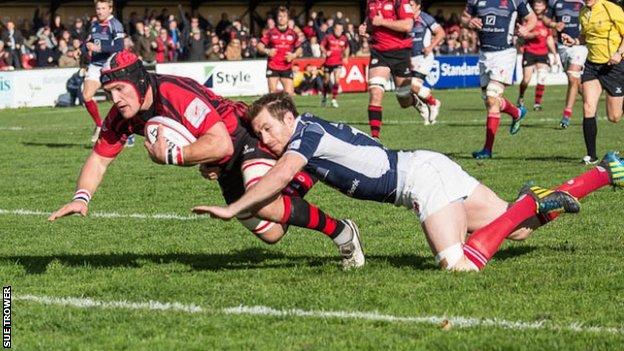 Championship strugglers Jersey remain without an away league win this season after a 41-33 defeat at London Scottish in a nine-try thriller.

Adam Kwasnicki's early try put the hosts in front but Jersey hit back through Ed Dawson and Max Stelling.

The islanders led briefly in the second half when Charlie Clare scored but Miles Mantella put Scottish back ahead.

I'm disappointed and I'm angry because we should've won the game

Richard Barrington went over for a late consolation score.

Despite Jersey coming out on top in the try count, it was the superb kicking display from Scottish winger James Love which ultimately won them the game with eight successes with the boot.

Hooker Kwasnicki had put them on their way to a fifth straight victory as early as the fifth minute when his try, after Jim Thompson's kick into the 22, opened the scoring.

And Stelling's converted try after a superb run from Guy Thompson in the final phase of the first half meant the visitors were just two points behind at the break.

The second period was one which would have thrilled any neutrals in the ground and could have gone either way.

Jersey hooker Clare, on loan from Leicester Tigers, crashed over the line following a driving maul just minutes after the restart and Michael Le Bourgeois' conversion put the Channel Islanders ahead.

But it was to be a short-lived advantage as Mantella's first try and a Love penalty from near the half-way line put Scottish back in the lead.

Jersey were not about to lie down though and when number eight Thompson breached the defensive line to score, the islanders had secured at least a bonus point.

But Scottish seemed to find another gear and Mantella's second, followed by Bright's touchdown, clinched the win and a bonus point for the hosts as well.

There was still time though for Jersey forward Barrington's converted try in the final seconds, which closed the gap to eight points and meant the islanders missed out on a second bonus point by just the narrowest of margins.

With bottom club Doncaster also losing on Saturday at Moseley, the single point gained by Jersey opens the gap at the foot of the table to two points.

"I was hugely impressed by Jersey's attacking play.

"What's really important is our guys' desire to improve each week."

"I'm disappointed and I'm angry because we should've won the game.

"We're giving away soft tries, it's almost like schoolboy stuff.

"We could have had more and we should have kept the ball but we continued to kick it away."