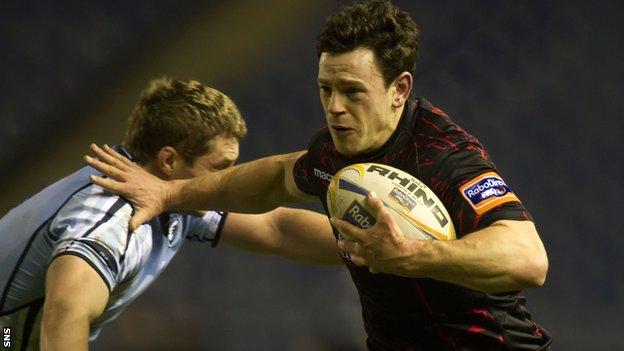 Scotland centre Nick De Luca has been given a 13-week ban for a tip tackle.

The offence took place during Edinburgh's 24-7 loss to Ospreys on Friday, with the 29-year-old sent off for the dangerous challenge.

An independent RaboDirect Pro12 disciplinary committee "considered the incident to be at the top end level for this type of offence".

De Luca, capped 38 times for Scotland, has the right to appeal against the decision.

Unless the penalty is reduced, the Dumfries-born player will play no more rugby this season, with the suspension to conclude on 26 May.

The centre was not included in Scotland's Six Nations squad due to a fractured eye socket.

In what was his comeback game, De Luca was shown a red card in the closing minutes for a reckless tackle on Tom Grabham.

The Ospreys substitute landed on his head and shoulders when flipped in the challenge.

De Luca won his first cap in 2008 against France and scored his first Scotland try against Italy in 2011.