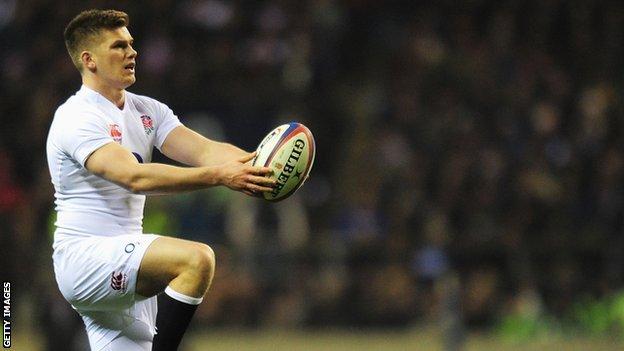 England fly-half Owen Farrell is rated as only 50-50 to be fit to play against Italy in the Six Nations on 10 March.

The Saracens player, 21, picked up a thigh injury in the 23-13 win over France and is making "good progress".

But head coach Stuart Lancaster said: "We have to make sure that the injury has healed properly so that it doesn't break down again through kicking."

England currently sit top of the Six Nations table with a 100% record from their first three games.

Farrell pulled up sharply with a quad strain after missing a penalty an hour into England's win over France last weekend, and was immediately replaced.

Lancaster wants the Saracens 10, son of England assistant coach Andy, fully fit before considering him for a game in which victory would leave England one win away from completing a Grand Slam.

He added: "There's no such thing as breaking yourself in as a fly-half, you're either fit or not.

"We'll give him time, but equally there comes a point in a week when we run combinations [in training]."

Lancaster also revealed that number eight Ben Morgan is not going to recover from his ankle injury in time to face Italy on 10 March.

But he may play against Wales six days later, when England will be challenging for their first Grand Slam since 2003 if they overcome the Italians.

Farrell, 21, is the top points scorer in this year's Six Nations with 42.

Lancaster may turn to Leicester's Toby Flood to replace him if Farrell fails to recover in time for the Italy game.

"Toby Flood trained really well today and is a good player for us, so I'm not worried in that regard," Lancaster added.