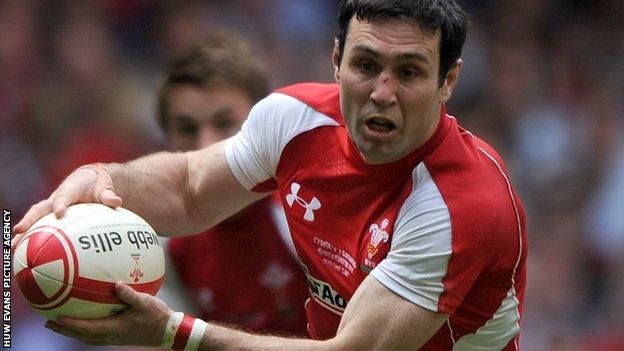 London Wasps fly-half Stephen Jones is to retire at the end of the season and take up a coaching role with the club.

Aberystwyth-born Jones played for Llanelli and then spent two seasons with French side Clermont Auvergne before returning to the Scarlets.

"I feel incredibly lucky to have played for some fantastic sides down through the years," he said.

Jones has made 11 appearances for English Premiership side Wasps and will join Dai Young's coaching team for next season.

"I feel the time is right for me now to make the transition into coaching, which is what I have always wanted to do.," Jones added.

"There is an opportunity for me to do that at London Wasps and I am very excited about the next step of my career."

Jones, Wales' most capped player, left the Scarlets at the end of last season and signed a two-year contract with Wasps.

In 2004 he French side Clermont Auvergne where he spent a successful two seasons before returning to the Scarlets in 2006.

He made his international debut as a replacement in Wales' record 96-13 defeat to South Africa in Pretoria in June 1998.

A former national team captain, Jones was a member of Wales' Grand Slam winning sides of 2005 and 2008 and played in four World Cups.

Jones overtook Gareth Thomas' 100 cap record in 2011 and won his 104th and final cap in the World Cup third-place play-off against Australia.

Behind Neil Jenkins he is Wales' second highest points scorer with 917 points which included seven tries.

He also scored 53 points for the British and Irish Lions in six Tests on the 2005 tour to New Zealand and the 2009 tour to South Africa.

Wales forwards coach Robin McBryde, a former Llanelli and Wales team-mate of Jones, paid tribute, saying: "I don't think I can quantify how much of an effect he's had over the years.

"He's been a stalwart, hasn't he, not only for Llanelli, but for Wales as well?

"He's one of those players, he's solid.

"You know exactly what you get with Stephen and he's had the experience of going away to France and going away to Wasps to play as well so as a player he's benefited from those experiences.

"And when he does turn to coaching, as opposed to playing, I'm sure he'll be an excellent coach as well."