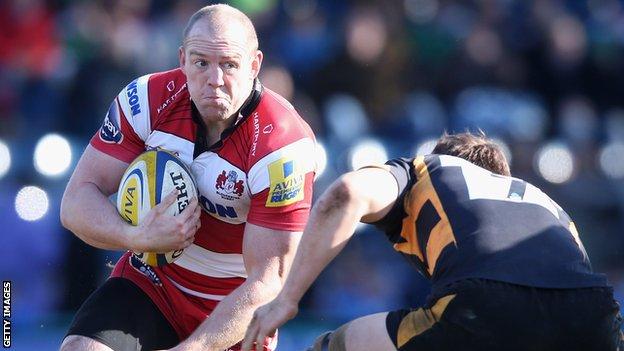 Mike Tindall has said he wants to extend his playing contract at Gloucester beyond the summer.

The ex-England captain was initially released at the end of the last season.

But upon Nigel Davies' appointment as director of rugby in June, the 34-year-old centre re-signed for the club as a player-coach, and will now make his 150th appearance at Bath on Friday.

"I've had the time of my life in the last eight years. Hopefully there will be more," he told BBC Gloucestershire.

"I want to continue the coaching role but with how much I've enjoyed playing this year, I don't think I'm quite done yet.

"I always said I won't stop until I'm not enjoying it, or if I can't keep up with the young lads, but I think they've helped me as much as I've helped them.

"It's been good fun this year and hopefully it will continue."

Capped 75 times by England, Tindall joined Bath as an 18-year-old in 1997. He spent eight years at the Rec before joining local rivals Gloucester.

He was one of 11 first-team members who were released from Kingsholm at the end of the 2011-12 season, and had been linked with a move to France.

But following head coach Bryan Redpath's departure and the arrival of ex-Wales centre Davies, Tindall agreed a deal that would see him work as a backs coach along with his playing commitments for the season.

And he has played a major part on the field this season, making 22 appearances in all competitions.

"I've played a bit more than I thought but that's down to positives," he continued.

"Billy [Twelvetrees] has been in the England squad which means we're a man down.

"At the start of the year I always wanted to play and I've really enjoyed it."

Tindall was expected to play his 150th competitive game in a Cherry and Whites shirt against Worcester last weekend, but he was ruled out because of injury.

He will now reach the milestone against his former club in the West Country derby at The Rec.

"It wasn't something I was thinking about until last weekend, but it's great," he added.

"But the most important thing is the result. I don't mind if I play like a bag of spanners on Friday - as long as we win."