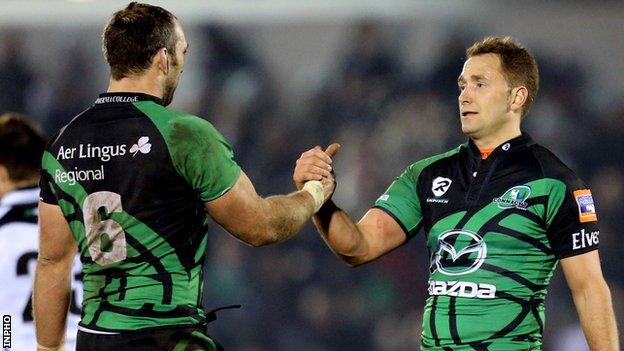 Dan Parks kicked a late drop goal and penalty to guide Connacht to a Pro12 win over battling Zebre in Galway.

Tries from Eoin McKeon and Gavin Duffy helped Connacht lead 14-3 but Leonardo Sarto's try helped cut the margin to a point by half-time.

Parks and Buso swapped penalties before a 71st-minute penalty from Gonzalo Garcia had the Italians within touching distance of their first ever Pro12 win.

But the six late points from the boot of Park saw the Italians denied.

Brimming with confidence after their recent wins over the Ospreys and Cardiff, Connacht took an early lead against the Pro12's basement club.

To their credit, Zebre fought back with Sinoti Sinoti threatening the Connacht line and fly-half Buso missing a couple of penalty chances.

Connacht appeared in control as a threaded Parks pass set up Duffy to step inside Sinoti before sprinting past a flat-footed Alberto Benettin to score under the posts, with the fly-half adding the conversion.

However, Sinoti's break on the half hour set up a try for Sarto with Buso's conversion cutting Connacht's lead to a point after he had slotted a penalty a couple of minutes earlier.

Parks replied for Connacht after the restart but Zebre began to take a degree of control after home replacement prop Ronan Loughney had been yellow carded for two successive offences.

A third successful Buso penalty was followed by a long-range kick from centre Gonzalo Garcia which put Zebre 19-17 ahead.

However, a Parks drop-goal restored Connacht's lead and Mauro Bergamasco's late sin-binning allowed the ex-Scotland international to seal the Irish team's win with another penalty.