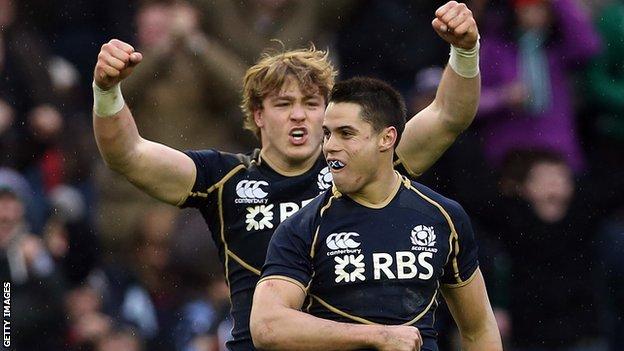 At half-time in the victory over Ireland we were 3-0 down. In the first 40 minutes it felt as though we'd never had the ball.

Ireland had done all the attacking and when we got into the changing room we were looking at each other wondering what had gone wrong.

Scott Johnson called us together; he underlined how effective our defence had been. We had kept the Irish out - we just had to keep executing our tackles.

Despite the game being played in our half, we knew we were still in it. We just had to get our hands on ball. If we did that the points would come.

In Mike Blair's column for BBC Sport Scotland he points up the effectiveness of the spot blitz.

This is where the outside players rush up in defence hoping to cancel the wide pass and shepherd the attack onto the strong inside defence.

Since coming to Scotland my defensive mindset has changed a lot. In New Zealand we use the slide defence more; here it's a pressing game.

We knew that there were two debutants in the Irish backs, Luke Marshall at centre and Paddy Jackson at stand off. Sean Lamont, Tim Visser and I wanted to shut that Irish threat down as soon as possible. I thought we did that pretty well.

In the second-half the momentum gradually started to swing our way.

In the 51st minute Dougie Hall put a big tackle on Rob Kearney. When you see one of your team-mates put in a massive hit like that it gets the boys fizzing.

It was an X-Factor play. Ronan O'Gara came onto replace Paddy Jackson and, with about ten minutes to go, he put in a cross kick. I'm not sure what he was thinking.

We hacked on and won a penalty to put us 12-8 in front. That was when I knew we had the beating of Ireland.

It was tight at the end, though. When Ireland won a penalty in the last minute I thought they'd just pick and go in a drive to the line; instead, the ball went wide.

It wasn't a nice feeling knowing that they could score against us with the last play of the game. Sean Lamont and I rushed up and Luke Marshall, who'd an excellent debut game for Ireland, knocked on.

If I'm honest the main feeling was one of relief. I turned to my closest team-mate and gave him a hug.

I don't want to go through that again: it just takes it out of you!

The game that is, not the hug. One of the best moments of the day was in the changing room after the match. You look across at your mates and see the smiles on their faces.

It's a moment we want to recapture soon.

Deservedly, Jim Hamilton won man of the match. I thought the forwards as a whole showed their class and the set piece was awesome.

One image will stay with me. At the end of the game Kelly Brown was sporting a bloody nose and a black eye.

It underlined the effort the whole team had put in. We're now in with a chance of winning the championship and the self-belief amongst the team is growing.

There isn't any secret formula to winning: it's all about preparing well and doing the small things correctly.

The guys are happy with the fresh ideas that Scott Johnson and Dean Ryan have brought. It's all about the basics.

Wales will be tough opposition in our next game but we are starting to understand each other.

It's all about building trust.

Sean will be writing a column for the BBC during the Six Nations campaign.