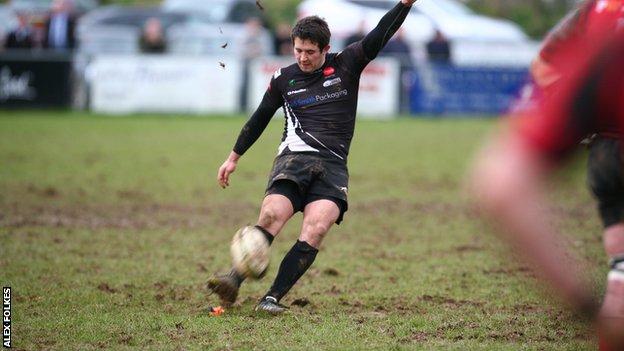 Launceston boss Cliff Rainford says his side could secure a top-six finish if they can build on the form which saw them win 22-17 at Taunton.

The Cornish All Blacks are level in sixth place in National Two South with Chinnor on 62 points after their win.

"We're seeing what results we can get to keep in touch with the top six," Rainford told BBC Radio Cornwall.

"We'd like to improve on last season, if that's still a target then we'll keep pushing for it."

Nielson Webber's sixth-minute try gave the Cornish All Blacks a 5-3 lead after former Launceston fly-half Gary Kingdom had put Taunton ahead early on.

Kieron Lewitt went over for a try eight minutes later which he converted before Kingdom struck back with two penalties to make it 12-9 to Launceston at the break.

Lewitt kicked another penalty before converting what proved to be the winning try from Martin Rice after 53 minutes.

James Forrester went over a minute later for Taunton, and despite a penalty from Kingdom, Launceston held on.

"It was a bit ugly at times, but we played some great rugby in the first half so I'm really happy," Rainford said.

"We got a couple of really well-constructed scores early on and we managed to keep building on that for the rest of the game."