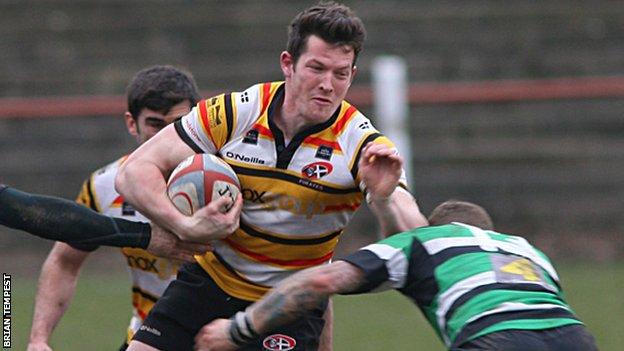 Cornish Pirates boss Ian Davies says it will be difficult for his side to make the Championship play-offs after their 37-25 loss at Leeds.

Despite being 15-12 up at half-time Leeds came back to get a win to leave Pirates five points off fourth-placed Bristol having played an extra game.

"After we blew the game with London Scottish it was always going to be difficult," Davies told BBC Cornwall.

"Bristol winning at Bedford and us losing has not made life any easier."

Tries from Paul Andrew and Kieran Hallett had helped Pirates to a 15-12 lead, as Rory Clegg kicked four penalties for Leeds.

Aaron Penberthy got three points back for the Pirates, but another former Mennaye player David Doherty got his 12th try of the season as he scored in stoppage time.

The Pirates did get an even later consolation try through Matt Evans, but they left Yorkshire without a point.

"It was a bit of a flat performance," conceded Davies. "We flattered to deceive in the first half, but in the second half the wheels came off royally.

"We didn't have any tempo and our lineout and scrum was creaking a little bit, which was disappointing.

"We're not going to give up, but there will be some changes for next week because some guys didn't perform, so we'll give other guys a chance to stake a claim for the British and Irish cup game against Munster.

"We want to finish the season on a high.

"Some guys are looking to move on to other cubs, but we've got to have some pride in that Pirates shirt to finish the season as best we can."