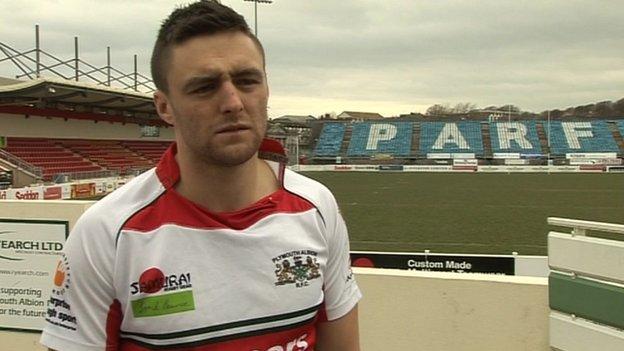 The 24-year-old has signed a deal with the Championship club until the end of the season, with an option it to be extended through to next season.

Cusack spent three years at Munster, but made just one Celtic league appearance as a replacement on the final day of last season.

"I want to have a positive impact on the squad," he told BBC South West.

For me to cover the full-back, fly-half and kicking duties, which we've been struggling with this season, is good

Cusack played Amlin Cup rugby with Gernika this season but left after financial problems at the Spanish club.

"Plymouth came and offered me a couple of months of Championship rugby which I'd been looking for since last summer but didn't quite manage to do," Cusack said.

"It was an easy decision to come here and play the last five or six games of the season.

"I was involved at Munster but didn't play a whole lot of games, but going to Spain gave the me chance to play 25 or 26 games which I haven't done in my career."

Plymouth by a single point after Paul Rowley missed a late conversion, and they have lost 10 of their last 11 matches.

"Looking at his profile he's a very good goal kicker and he's also a utility back," added Saumi.

"For me to cover the full-back, fly-half and kicking duties, which we've been struggling with this season, is good."