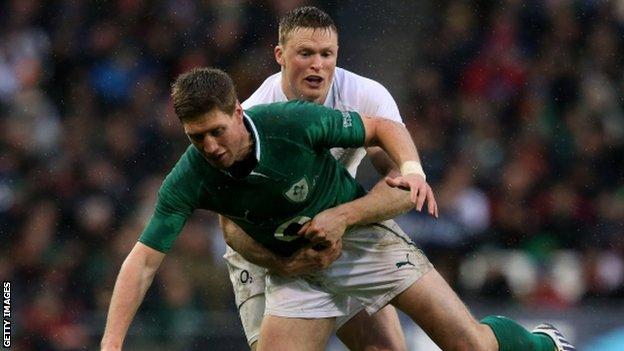 Chris Ashton insists he is not afraid to make tackles after criticism of the wing in the wake of England's Six Nations win over France last Saturday.

Ashton, 25, came under scrutiny for allowing Wesley Fofana past him in the first half for France's only try.

"I thought there was a lot of heat for one tackle, although I am trying to get better at that all the time," said the Saracens wing.

He added: "This [criticism] is new for me. I don't know where all this defence stuff has come from."

England's victory over the French put them within two wins of a first Grand Slam since 2003, but Ashton was left behind as France centre Fofana side-stepped him before scoring to put the visitors ahead in the first half.

Ashton, who switched to union from rugby league side Wigan in 2007, says such moments will happen against a player of Fofana's quality - but insists he is working on improving his defensive work.

"One tackle has cost us a try, but I was caught out by an outstanding player and he scored a try - at some point Fofana is going to do that again," said Ashton.

"I got myself into an uncompromising position and it was unfortunate that I gave him that time to use his footwork on me and get away from me.

"At this level you can't really afford to let those things happen. I put more than enough pressure on myself to know that.

"I'm my own worst critic and I will be trying to get better at it."