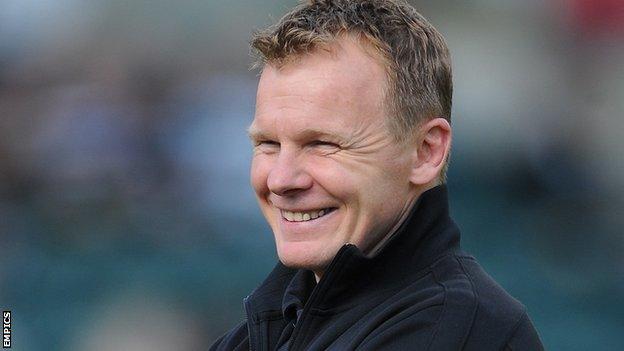 Saracens director of rugby Mark McCall says the club's priority is now to secure a home semi-final in the Premiership play-offs.

Sunday's bonus-point victory over London Welsh took Saracens to the top of the the table with five games of the regular season remaining.

McCall told BBC Radio 5 live: "We'd love to play a semi-final here, we've got ourselves into a great position.

"But we play Quins next, then Wasps away, so there's tough games to come."

Quins' shock defeat by Exeter opened the door for Saracens to take over at the top of the table, but McCall said that result, and Sarries' own faltering performance in the first half against a determined London Welsh side, showed there was still plenty of hard work remaining.

"We're going to have to be better than we were against London Welsh. We were well below our best, especially in the first half.

"People might say we were missing four England internationals, but I don't agree with that. Last week [against Leicester Tigers] at Welford Road we were brilliant in attack, we caused Leicester all sorts of problems and scored four tries in the second half, so that's not the case.

"Thankfully we were much better in the second half [against London Welsh] and scored the three tries we needed to get ourselves a winning bonus point, which was what mattered."

With next week set aside for the LV Cup semi-final at Sale, and the next Premiership fixture not until 24 March, all Saracens' England internationals are expected to be available for the run-in.

"We'll make some decisions after England play Wales as to who comes straight back in and who has a rest," said McCall.

"The LV Cup semi-final is very important to the club next weekend, we'll rest some who played against London Welsh and back the players who got us into the semi-final, and look forward to that."