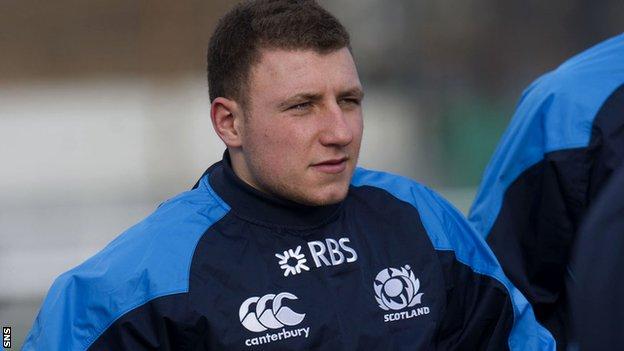 Weir, 21, whose three previous caps have all come as a replacement, replaces club-mate Ruaridh Jackson.

The other change to the side that beat Ireland last month sees Euan Murray return at tight-head prop with Geoff Cross dropping to the bench.

Wilson, who captained Scotland A to victory over England Saxons in February, takes over from David Denton, who was ruled out after suffering knee damage.

It's a good test for us and it'll show us where we are and test our character. But I've no doubt there is good enough character in our side to make it competitive

The number eight picked up a knee injury while playing for club side Edinburgh against Scarlets on Friday.

Flanker Al Strokosch also returned to the Scotland squad on Monday after a facial injury against England in the opening Six Nations match, but has not made the match-day squad.

Scotland interim head coach Scott Johnson said Weir had played well after coming on as a replacement in the 12-8 win over Ireland last month.

"He's a talent with a really good work ethic and a thirst to improve, which I like a lot," Johnson said.

"Ruaridh remains a key part of our squad but he knows with Tom Heathcote proving a match-winner for Bath and kicking goals from here, there and everywhere, that he needs to up his game too.

"Geoff was a stand-out against Ireland and it's up to Euan, who fronted up big time against Italy, to raise the bar again."

Johnson also insisted the changes should introduce an element of competition to the squad and make for a competitive match when the Welsh visit Edinburgh on Saturday.

"There's certainly an understanding that we're more buoyant than we were at the start of the competition - that's a good thing," said Johnson.

"The trick is trying to find a combination of the two to compete. We'll need to do that.

"This is another step up - they're a quality side and current champions and probably the form side over the last four or five years in the north.

"There's no excuses. It's a good test for us and it'll show us where we are and test our character. But I've no doubt there is good enough character in our side to make it competitive."