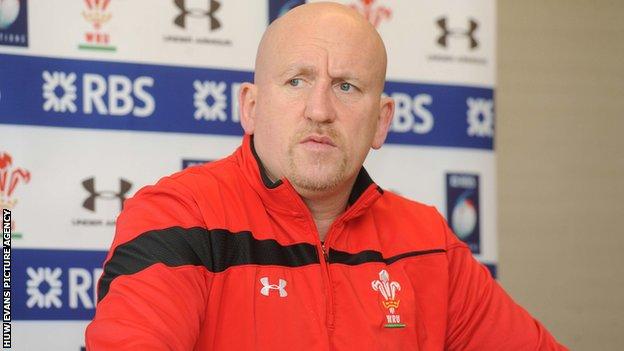 While Wales recorded wins over France in Paris and Italy in Rome, Scotland recorded 12-8 victory over Ireland in Edinburgh.

The Scots' home victory over the Irish was very much against all the odds and built on a solid defensive display.

"They are very resilient," said Edwards, the Wales defence coach.

"Scotland have a little bit of momentum as well. We are going up there, two evenly matched teams going at it and that is what sport is about.

"That is one of the main attributes you want from any sportsman or sports team... is to be resilient. Scotland are certainly showing that at the moment."

But Wales, who play England in the final Six Nations game in Cardiff, and Scotland can still win this season's Six Nations title.

The Welsh are currently second in the table, while the Scots are in third place but both sides have two wins each.

Wales, who won the Grand Slam in 2012, lost their opening game of the Six Nations 30-22 to Ireland in Cardiff, but have bounced back with two away wins.

Rob Howley, the interim Wales coach, saw his side end their recent run of eight Test match defeats with a 16-6 victory over France to record their first win in Paris since 2005.

Scotland suffered a one-sided 38-18 defeat to England in their opening game at Twickenham, but they have recorded victories over Italy and Ireland since then.

Edwards, who was part of the Wales coaching team who won the Grand Slam in 2008 and 2012, has reminded everyone of his side's impressive record in the Six Nations.

"I was looking at the record books recently and these lads have been absolutely fantastic over the last few years," said Edwards.

Since losing their opening game of the 2011 Championship at home to England, Wales have actually lost two of their 12 matches since.

But Edwards was not involved in the 28-9 defeat against France in Paris at the end of the 2011 campaign, after being banned for a week following an altercation with another member of Wales' backroom team.