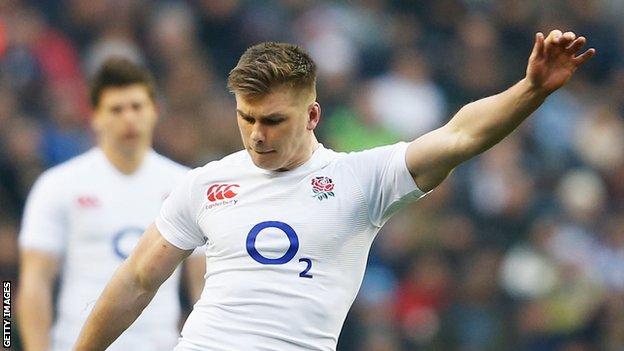 England fly-half Owen Farrell will not be fit to play against Italy in the Six Nations because of injury, but flanker Tom Croft has been added to the squad.

Farrell, 21, picked up a thigh injury in the 23-13 win over France but is expected to be fit for selection against Wales on the final weekend.

Croft has recently returned after nine months out with a serious neck injury.

England are top of the Six Nations table with a 100% record from their first three games.

Victory for England against Italy would leave them one win away from a first Grand Slam since 2003.

Farrell's absence is a major blow, with the Saracens player the top points scorer in this year's Six Nations with 42.

Toby Flood will start against Italy in Farrell's absence.

"Owen's still got the quad injury which I want to make sure has settled down completely," said England head coach Stuart Lancaster, who will confirm his line-up on Friday.

"We're pretty confident that Owen will be fit for next week.

"We still have a decision to make on the bench and we'll make that over the course of the next two days.

Flanker Croft, 27, had been expected to miss the entire Six Nations campaign, having only recently returned to fitness after injuring his neck in Leicester's 43-33 win against Harlequins in April last year.

But he completed consecutive matches for the first time this season on Saturday when he led the Tigers to victory over Sale, and he is available for selection against Italy.

"Tom has been seen by a specialist, played back-to-back games and played 80 minutes at the weekend and did extremely well," Lancaster added.

"In consultation with the medical teams and (Leicester director of rugby) Richard Cockerill, we've brought him back into the camp. He's available for Italy and Wales."

Croft has won 36 caps for England, and played all five of last year's Six Nations matches before his neck injury.

"Tom is one of our most experienced players who has played at the highest level," Lancaster added.

"When we go back to the Six Nations last year he was outstanding and was a key leader as well as player. He brings a lot.

"He's worked extremely hard to get back to fitness and into contention."

Number eight Ben Morgan is unlikely to be fit in time to be involved against Italy because of his ankle problem but Wasps' Billy Vunipola is set to train this week after recovering from a similar complaint.